Earth-helping tech. Some of them will be billion dollar businesses while helping the planet.

Collecting garbage in waters as a service.

Backed by Salesforce’s founder (“Marc Benioff, who contributed to the $22 million that the Ocean Cleanup raised” in 2017 - source - Wired)

… Boyan Slat founded The Ocean Cleanup at the age of 18 in his hometown of Delft, the Netherlands.

They previously tried using a giant tube but it split into two in the ocean. So they listened to feedback and came up with something different:

Today in a slick Apple-style event in Rotterdam, the group unveiled what it’s calling The Interceptor, a solar-powered barge with a long floating barrier that extends upstream, funneling debris into the vessel’s mouth, where a conveyor belt ferries the trash into onboard containers. Two are already in operation in Indonesia and Malaysia, with another preparing for operation in the Mekong in Vietnam and another planned for the Dominican Republic. It’s a great idea that, well, has been done before: interceptors (lowercase), as their known, have been operating for several years in Baltimore. That’d be Mr. Trash Wheel, an interceptor with giant googly eyes in Baltimore Harbor that gobbles up 200 tons of trash a year, and its sibling Professor Trash Wheel. (If you’re not following Mr. Trash Wheel on Instagram, you’re missing out.) 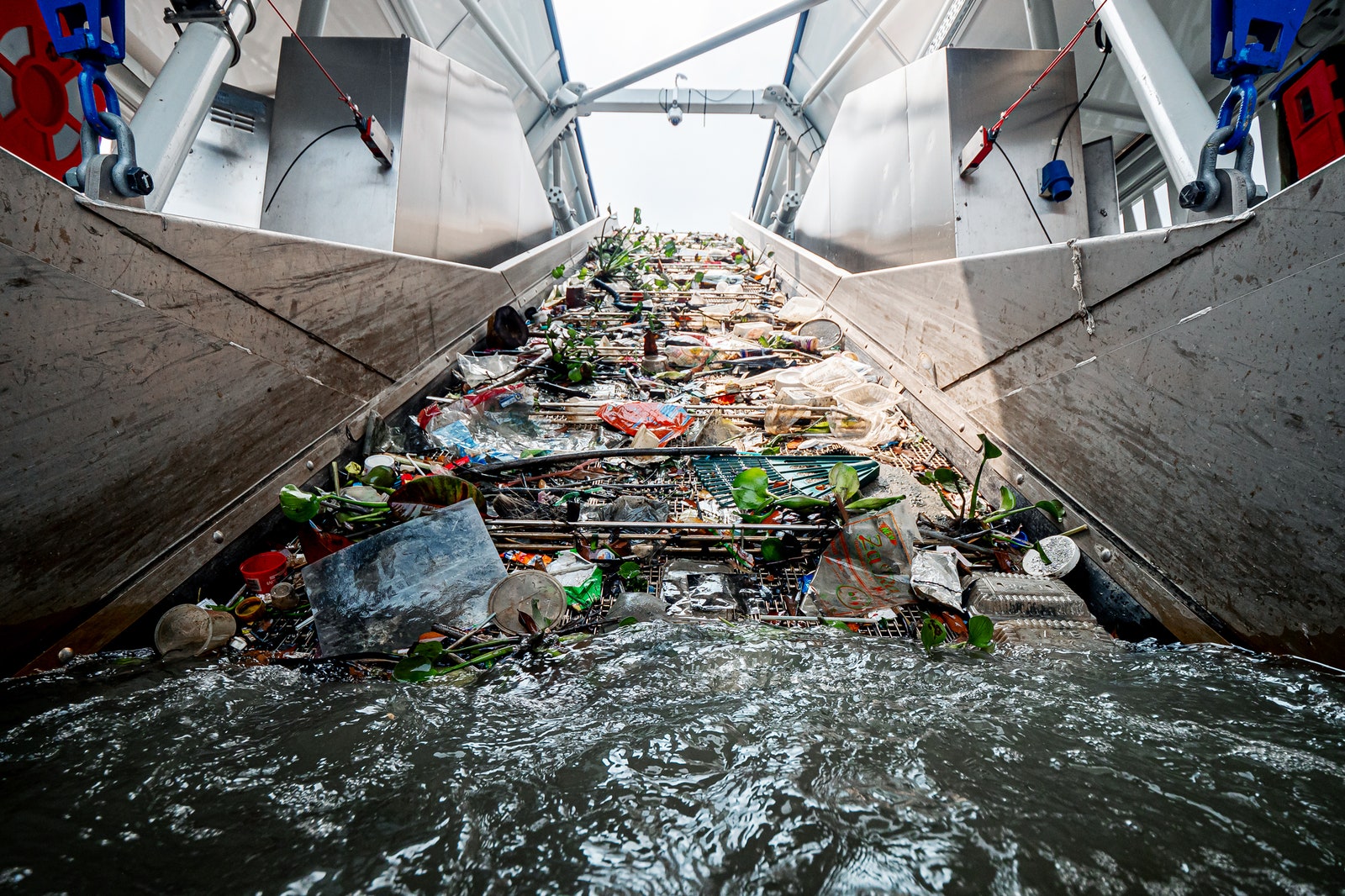 Whereas Mr. Trash Wheel was purpose-built for Baltimore, The Ocean Cleanup designed its barge to be mass-producible. And it’s significantly higher tech: Baltimore’s barge uses a water wheel to power its conveyor belt, with solar power as backup, while The Interceptor is fully solar powered. Trash flows up its belt (Boyan Slat, founder and CEO of The Ocean Cleanup, demonstrated today with a flow of rubber duckies) and into a “shuttle” bin, which deposits the waste in one of six dumpsters situated below. Once the barge is full, the system sends a text message to operators in the area, who come with a tug boat and pull the bins to shore. It can capture some 50,000 kilograms of trash a day, and is designed to last 20 years.
…
“I would argue almost any weekend of beach cleanup could probably capture more trash than they’ve collected in their six, seven years in business,” says Marcus Eriksen, who studies ocean plastic and directs the 5 Gyres Institute. “If you want to solve a problem, you go upstream or downstream. And the further you go downstream, you just keep on adding dollar signs to the cost of the mitigation.”

The anti-plastic crusaders have another plan to keep junk from reaching the sea: trash-eating barges in rivers.