Tropicfeel is in private mode and already overfunding:

Tropicfeel is raising £625,000 investment on Crowdcube. Capital At Risk.

Tropicfeel allows travellers (1.4bn per year) to focus more on travel and less on packing the right gear by designing high quality, versatile & sustainable gear. With +7.1M€ revenue on the last 20 months, selling in 140+ countries, Tropicfeel is...

How do you determine 400% increase in token price? What exchange are the Geo listed?

If the tokens are currently restricted then I would expect a huge dump in price once investors are able to sell them. It doesn’t take much liquidity to move the price of cryptocurrencies, especially the small cap ones on exchanges like Longbit.

The main issue I have is that most start ups fail and once you’ve invested it’s hard to ever see a return of your money. So if the success of a project is related to a token, I’d rather just buy the token and have the option to sell at any point.

Each to their own though, if you believe in the project then I can see how it would be appealing.

Magway is nearing the end of its campaign - seems like a promising company that has won a few awards and has gained government funding. It’s a company looking to influence delivery systems using low carbon emission pipe technology. Seems like a good idea to me! Thoughts anyone?

Anyone here invest in Coconut? I did (one of my bigger ones) and have huge hopes for these guys. Essentially a tool that can run a self employed person’s business, provide powerful insights and save days of time each year on accounting and tax. I think they are in the right place at right time with the right solution.

Announced that in addition to a pre emption round they will be opening up a second raise on CCube in early March.

IMO Well worth a look

Sorry this one’s taken a while, i’ve been tied up with a related project. It’s been great to see the community uncover some raises well before i’ve finished my write up though, and even one that I wasn’t aware of! This community is ace!

So here goes: I met up with Joel Ippoliti (Chief Product Officer) and Nick Lawson (Marketing) at Seedrs recently.

As a result of this meeting, I got the inside scoop on some upcoming features and was immediately excited to relay this info to you guys and gals, here it is:

Pre emption club: Certain members of Seedrs will eventually gain access to all of Seedrs’ pre-emption campaigns, through a monthly newsletter. Work is ongoing.

Auto invest : This feature currently invests pre-determined amounts for you automatically, and is set to develop further to include selling capabilities.

CityFalcon partnership: CityFalcon is a financial news platform, currently displaying news related to crowdfunded business on Seedrs’ website. This partnership is set to evolve, with Cityfalcon looking to integrate Companies House filings into the feature.

Portfolio Update: a comprehensive document containing statsitics on their funded companies. Their last update revealed that 577 deals had been completed, and their aggregate IRR was ~12%. The next portfolio update is slated for H1 2020.

The Seedrs app is in the prototype phase, here is a screenshot: 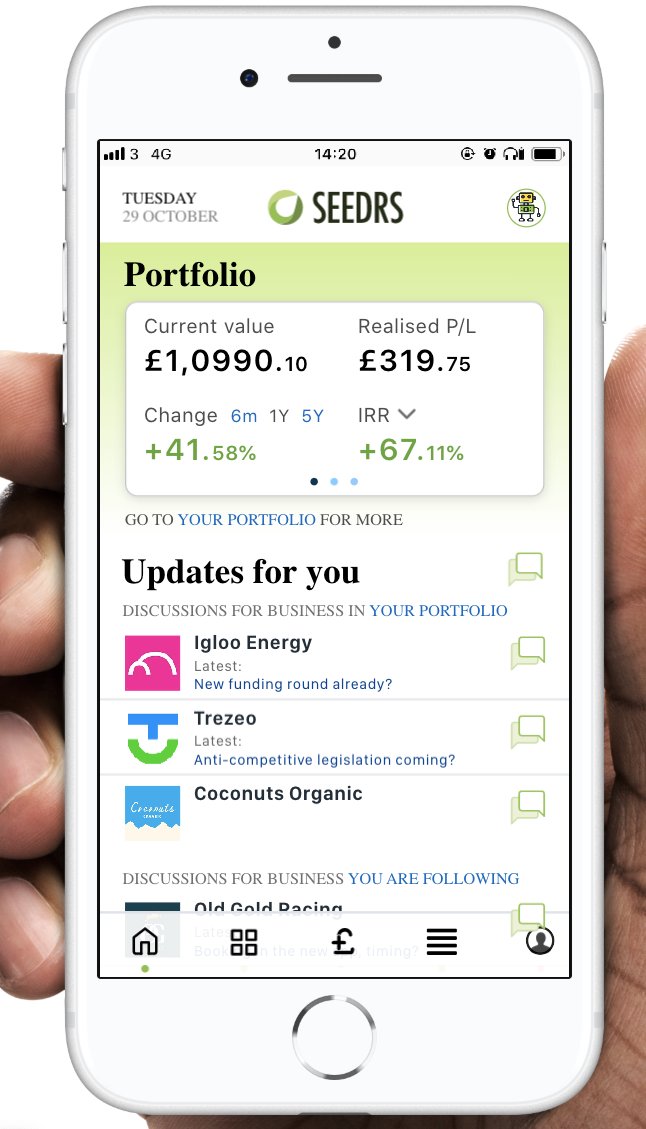 Having used the app prototype, I think it’s great, very slick - even for a prototype. It looks set to have the functionality of the site, with the simplicity and convenience you get in a mobile app. The depth of user research going into it only makes me more excited to see where the final product ends up.

Seedrs will also be launching a great new feature: 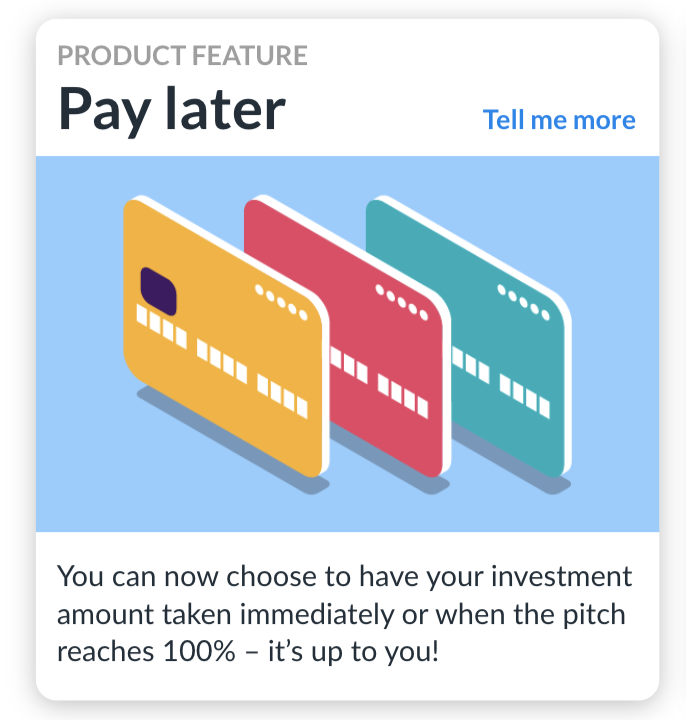 Discourse forum:
Seedrs will also eventually be launching a discourse forum, much like this one; there is a wealth of wisdom scattered around the Seedrs forum in private shareholder threads, so a unified, public forum on the site could end up a valuable resource!

For the Seedrs shareholders out there: Seedrs will be announcing a £15-20m institutional round later this year. Whilst this is old news, it was reassuring to hear things were still very much full steam ahead on this front.

Hoptroff - A startup whose mission is to improve server clock accuracy in the finance and media sector to microsecond precision. Invest here

Rnwl - An insurtech startup from the founder of Syndicateroom. pre-register here Thinkihng about reeling him in to do an AMA with us pre-crowdfund, stay tuned!

As some of you already know: Allplants (Vegan meal delivery), Moo (web to print company) and Fronted (Rental Deposit fintech) are all slated to be crowdfunding soon also!

Coconut, accountancy automation fintech, will be crowdfunding by April. If you’re a lucky shareholder, you’ll get access to a pre-emption round at a 20% discount beforehand.

Crua - A tent startup that has funded on Seedrs in the past.

GeoDB crypto platform that allows you to earn money from your data. pre-register here.

Borrow a boat - Airbnb for boats (boat rental marketplace, VC backed). Grown revenue by 300% in the past year, secured £1m via Crowdcube around 1 year ago. pre-register here.

That’s all for now everyone! I’ll be returning with a write up on an upcoming landmark raise and possibly a write up on my Crowdcube visit (Many thanks to Shaun Sharkey for having me!)

I hope to return with an update/announcement on the project i’ve been working on too!

Ofcourse many thanks to Joel Ippoliti and Nick Lawson of Seedrs !

These guys are really on top of their game; If you have any feedback on this post, seedrs etc - please feel free to talk it out here - they strike me as determined to understand their users’ wants and needs so i’m confident yours/our voices will be heard Thanks to all of you for your contributions, but special shoutout to @Alderms @Lee @TickTock @JCFronted @hrpnk @tinku333 @Biyka for their gnarly posts. If I haven’t mentioned you it’s just because i’m awfully forgetful. 'ppreciate you all.

The product looks great, however the market is getting smaller due to IR35 legislation which is forcing a number of self-employed/limited company’s/personal services companies into PAYE either via a permanent position, a temporary ‘permanent’ position or via an umbrella company all of which means there’s no requirement for an accountant/software alternative.

Great update! Thank you.
On the secondary market and off Seeders ownership. You wouldn’t be able to trade CC raised equity though presumably?
I really think CC are falling dangerously behind with their reluctance to build a secondary market…

Tropicfeel is in private mode and already overfunding:

I was interested to invest, but did not see any EIS / SEIS…

6 posts were split to a new topic: Coconut crowdfunding

Gohenry, the Gen Z neobanking startup, is in the final stages of closing a major VC round that will accelerate their US expansion.

They are a Spanish company, so no EIS, as this is a British scheme.

Can’t wait for all of these new features!

Great update! Thank you.
On the secondary market and off Seeders ownership. You wouldn’t be able to trade CC raised equity though presumably?
I really think CC are falling dangerously behind with their reluctance to build a secondary market…

First of all, thanks for saying thanks/kind words, not just you but everyone

Anyway, let me shed light on that question:

Seedrs are able to put any directly own shares from CC raises into their nominee structure (this means carry fees btw); Crowdcube likely wouldn’t allow this for nominee shares. So directly-owned shares shares directly from previous CC funded business could be sold on Seedrs’ secondary market, potentially to anyone.

In fact, they have done this already with Innis and Gunn (their seedrs raise didn’t need to happen for this to take place). What’s interesting is that secondary transactions in private equity are easily a multi-billiion pound market. I’ll try and put the scale into context; Imagine being able to buy Deliveroo or SpaceX employee options/VC secondaries on Seedrs?

But let me say that I’ve always been supportive of Crowdcube’s decision to forego a secondary market for now. I recall that the Idea was that leaving it out allows them to focus on scaling instead, and if leaving out a secondary market has helped them somehow better utilise resources to get the likes of Patch plants, Cowboy, Finisterre, etc on board - then i’m all for it.

Very interesting how these two businesses have taken very different approaches to execution.

CityFalcon loses major contract (rumoured to be from Revolut), after the partnering fintech’s legal team was weary of CityFalcon’s financials.

Can you articulate a bit more? They just opened a new round on seedrs.

He’s as transparent as founders get, by the way.

I cannot mention what company it was, but we shared the case transparently on Linkedin here.

Also, this is not client churn, but a loss of a potential contract.

btw, we are excited about our partnership with Seedrs, and you can hear Joel (their CPO) talk all about it in the video on our Seedrs campaign which is in private mode until Monday

Let me know if you have any questions.

I’ve always been supportive of Crowdcube’s decision to forego a secondary market for now . I recall that the Idea was that leaving it out allows them to focus on scaling instead

Crowdcube is targeting quantity rather quality by deciding to prioritise scaling rather than adding a secondary market. But are we sure that what’s good for Crowdcube is good for crowd investors? Only a system involving carry would align Crowdcube’s incentives with those of the crowd investors. Seedrs makes money only when investors make money. This is not the case for Crowdcube. Carry is also the solution used in the private equity industry.