The FT’s article from 2017—still relevant. Hint: with constant advances in research, it’s never going to be too late, as there is a massive shortage, just as there is a shortage of decent mobile app developers and data engineers and full stack coders, despite the never ending supply of people with CS degrees.

Software doesn’t stand still either, so programmers always have to skill up.

Why is it relevant to investing? Look at who the company you are researching is hiring, what proportion their engineering department makes versus everyone else, which university do they hire their graduates from. It’s in the annual reports and their careers pages and external market research (use Google). E.g. Softbank’s Compass unicorn real estate investment only has around 5% of tech people working for them—far less than Zoopla.

The Top 10-20 companies by market cap did not get there because they were lucky in 2019. If BT, Vodafone, HSBC or the latest startup is not working with data analytics and/or AI/machine learning, you should not be investing in them.

And VW and Ford wouldn’t be the leaders of auto without literally robots assembling their cars. And neither would Dyson, Ocado, Amazon or Apple, who are hiring the best talent there is.

If you can’t beat robots then why not teach them?

Is it too late to cash in on the boom? Studying machine learning may still be a good idea nonetheless 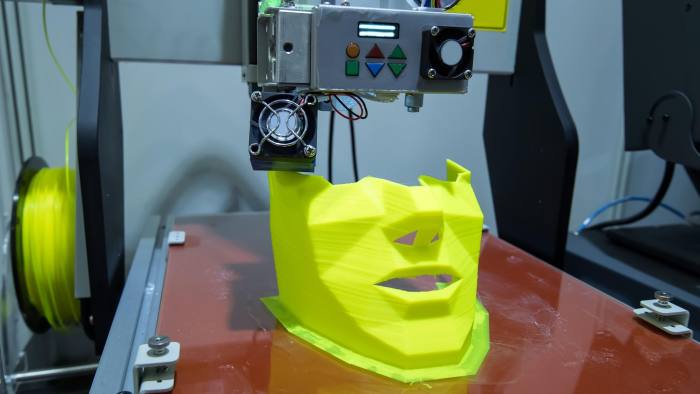 It may be time to give up journalism and become a machine learning programmer. It seems a logical move, in the spirit of “if you can’t beat ’em, join ’em”.

We have written thousands of column inches over the past few years about people’s fears of robots taking their jobs. The only secure job left, it seems, is programming the robots.

The salary is also a draw. Machine learning specialists are among the highest paid computing professionals. In the US they command an average salary of more than $100,000, according to Stack Overflow, the online community for programmers. They also out-earn their developer and data scientist peers in the UK and France ( see graphic below ).

Machine learning is a type of artificial intelligence that gives computers the ability to gather information without being explicitly programmed. It is in high demand from companies trying to analyse increasing amounts of complex data. The technology was right at the top of Gartner’s hype cycle — which judges how inflated expectations of emerging technologies are — in 2016. 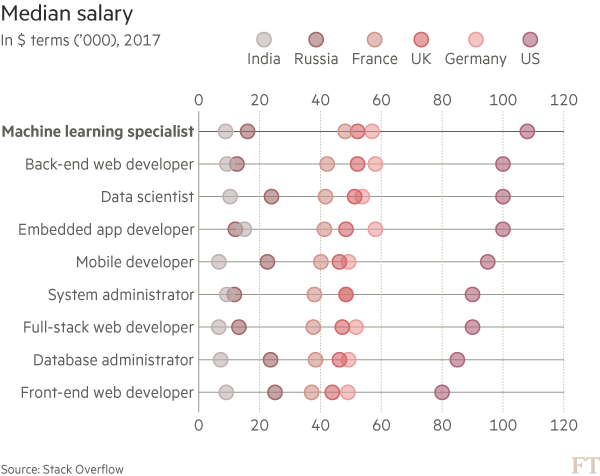 People with the right programming skills are also in short supply. “We find it extremely difficult to get the right people,” says Asaf Yigal, co-founder of Logz.io, which uses machine learning to help businesses, including British Airways and Oracle, analyse their IT system logs. “It is a very difficult position to fill so they get paid whatever they want.”

About 20 per cent of Logz.io’s programming team focuses on machine learning and Mr Yigal says he often poaches people from the cyber security industry as they have the right combination of mathematical skills and business experience.

“The market is completely dry, there is no one you can just recruit. That is why people are paying enormous premiums,” says Daniel Kroening, professor of computer science at Oxford university and founder of DiffBlue, an AI company.

So how can you change careers and enter this lucrative field?

“You need to have a lot of maths, preferably a PhD. Many machine learning specialists are recruited out of academia,” says Kevin Troy, director of insights at Stack Overflow.

Coralie Petermann, director of data science at Sublime Skinz, an advertising company that uses machine learning to, among other things, detect fraudulent clicks on its ad campaigns, says: “I am looking for people who have good comprehension of complex problems. I ask specific questions, not just advertising problems, but I want to understand how this person is thinking.”

Five out of Ms Petermann’s 25-person team work on machine learning and she is looking to hire another five by next year.

Students have not been slow to spot the career opportunities. Applications to study machine learning at postgraduate level at Oxford university have grown significantly in the past few years, says Mr Kroening.

If years of university study seems unappealing, there are a few other routes. Mr Kroening has, for example, created his own machine learning training programme at DiffBlue after struggling to find the right staff.

“We hire people with a first degree in computer science or maths and train them to do what we want. They are much cheaper, their salaries are around half of what a machine learning developer would be paid,” he says.

He has been inundated with applications. “People are very keen to receive the training. We haven’t had to pay a single pound to a recruiter so far.”

Mr Kroening says it takes trainees around three to four months to “start being useful”. DiffBlue, which has built technology for several financial services companies, has around 45 staff and wants to expand to 100 this year.

Teaching yourself with online tutorials is another option. The big three online education providers, Coursera, Udacity and edX, all offer courses in the subject and Andrew Ng’s machine learning course on Coursera is considered a good place to start.

Logz.io’s Mr Yigal, however, is sceptical of self-taught skills. “A lot of people say they know machine learning but they don’t. The market has been flooded with people who don’t really understand the algorithms,” he says. Mr Yigal gives candidates practical tests to weed out those without deep knowledge.

As with any supply and demand imbalance, this one will eventually be corrected. Stack Overflow says there has been a gradual increase in the number of machine learning specialists in its online forums.

“We survey users on what they do and in some regions we have seen 50 per cent year-on-year growth in people working in machine learning,” says Mr Troy. “Only about 0.5 per cent of Stack Overflow traffic five years ago concerned machine learning, now it is about 4 per cent. It has grown about 8-fold in the last five years.”

So is it too late to embark on a PhD and cash in on the boom? Perhaps. Salary growth has slowed, although wages remain higher than for other computer science roles. But studying machine learning may still be a good idea nonetheless.