You know there is a very high chance with HE1 poor management that they will eventually drill, find huge amounts of quality helium but will forget to insert tap into said borehole and allow all helium to escape.
With over £7.5k invested, I obviously would like great results but confidence has been shattered.

Still on target for January. 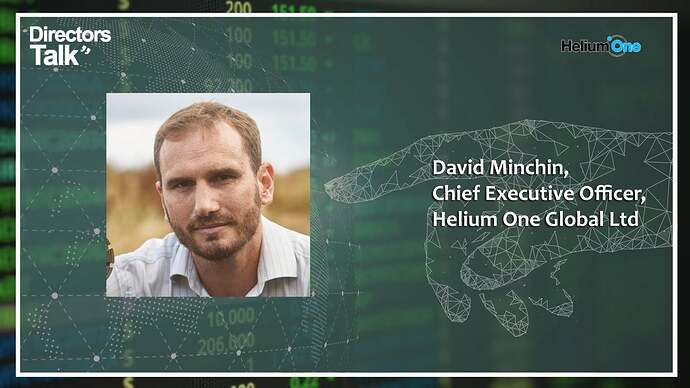 Helium One Global (LON:HE1) CEO David Minchin joins DirectorsTalk Interviews to discuss the successful completion of a third-party engineering audit on the oper

Thanks, nearly bailed on this yesterday

Even though I’m down 45%, I’m feeling exactly the same

I got rid of half mine but I’m sure there will be plenty of time to pick some up at current prices before January if I want to.

Down 41% for me, but I only have a small number of shares so it’s not a big value/loss.

It has definitely become a ‘meh, whatever’ affair for me now, rather than one I am hot-watching.

Down 38% on this stock …i haven’t got alot invested …this and TM1 are the only red in my portfolio… but these are long term investments,
Im putting it all in Lithium mining at the time being … Lithium is the future!

Mind if i ask which lithium guys you got?

Drilling meant to start beginning 2023 so fingers crossed for some movement. Although, making any sort of profit will be miraculous so I only really expect to break even

Wasn’t this always the case?

We knew they were auditing new drilling contractors as I’m pretty certain that was announced last time, hence why it continued to drop even with said news.

I see this as positive news, confirming the drilling rig has been audited and has basically been given the green light to commence drilling.

Though, I could be wrong…

As far as I read it they’re not saying that this drill rig has been audited and is good to go, they’re basically saying it’s running now so it’s probably gonna be fine

. That seems like a fair assumption to me. I was a little surprised by the process they put the other drilling rig. It seemed a bit unusual.

My issue is that they’ve basically just said “we’re changing drill contractor because of reasons” with no further explanation.

Also why an MOU rather than signing a contract for the drill to be ready to go in a certain location at a certain date? That suggests to me there are going to be further holdups.

I haven’t really investigated further than reading the RNS (and I should probably go back and re-read some of the old ones for context) but something about this feels off to me. It doesn’t exactly fill me with hope.

So who is responsible for getting excited about the little gains and scaring it off?

What was the prediction for these shares again? 19p?

The annual report is out today. I haven’t had a chance to go through it properly yet but the market clearly isn’t keen.

I’m a little surprised how much money they seem to have spent to achieve very little. There’s also a bit about license relinquishment which is news to me. It looks like they didn’t renew some of them to save $300k, but have also taken an impairment charge of $8mn as a result? I need to properly look at this evening to understand what is going on.

If anyone has any insights to share i’d love to hear them.

Increase in loss, having a net loss of 13 million and the fact they’ve said they don’t expect to generate any revenues in the next 12 months (from June 22) is a bit worrying. Also, in June 2022 they had 5 million in cash which will probably run out soon.

So basically, sounds like they’re out of cash depending on how much they spent on the recent prep.

CEO took an extra 60k salary in that year though

Yeah I thought the increase in directors compensation was odd.

My quick reading of it was that of the 13mn loss 8mn was due to a decrease in the number of license areas that they are including in net assets? In that case £5mn in cash would still only be 10-12 months runway max. Probably less because they’re planning to actually do something this year and drilling is expensive!

Hopefully they will have a decent strike and can raise some capital at a higher share price. My instinct is telling me I should look for a decent opportunity to get out and take the loss, but I’ve felt like that most of the last year so