I like the service but can be on the expensive side for what you are getting. This shit below annoys me

I’ve had the Airbnb app on my phone for three or four years now, after a friend told me about it. And so far? Zero bookings made through it.

Largely because it was sold to me as “Here’s a cheap alternative to hotels”, and indeed the headline price often is. But the genuinely cheap places are often poorly located for my needs, while the ones I’d actually be interested in have ridic minimum stay periods a nd stupid cleaning/service fees.

End result being, it has yet to be the case that staying in a hotel hasn’t been cheaper and easier. Ach.

I’ll never understand why people will list a bunch of non-optional additional fees instead of simply baking everything into the headline price (see also: music gigs and ‘booking fees’). It’s verging on dishonest to headline with a rate that no-one will actually pay because of the unavoidable extras on top.

They have no USP whatsoever. Another company just needs to come in, undercut on the fees (f.e. taking on some of the taxes to be more attractive to both customer and homeowner), and AirBNB would be bust.

‘Resort fee’ in Vegas… for using the hotel facilities. Like that is what a hotel is for. Then add a tip. Oh and local taxes. Sorry forgot the state taxes. Oh and maybe another tip?

More left wing the state the worse it is as well. Texas is not as bad when I was there. No state income tax

They have no USP whatsoever. Another company just needs to come in, undercut on the fees (f.e. taking on some of the taxes to be more attractive to both customer and homeowner), and AirBNB would be bust

If this were the case, someone would have already done that.

Looks like they’re exploring an interesting equity model, to include their hosts.

Airbnb Says It Plans to Go Public in 2020

Making a public statement about a stock market debut in a particular year is unusual among technology start-ups, which typically keep their plans secret.

I agree with you, @Han. Other companies tried to do home rental this way even before Airbnb, and since, and haven’t managed to execute nearly as well.

I feel they’ve built an incredibly strong brand and product and would predict that they’ll continue to grow strongly in future.

Love that system would like to see more companies integrate this. Intrigued to hear more how this would be implemented. What constitutes the right level of host to receive equity is the question. What is the threshold

As an Airbnb ‘Superhost’ I’m intrigued to find out more about this, too!

If the cleaning fees are over the top, you can book with another (super)host. Some areas charge a mandatory tax on top, so can’t avoid that.

Airbnb can be a true money saver in very popular and/or expensive areas and they know how to make money for themselves too.

Airbnb to follow Spotify and Slack’s lead and issue shares directly bypassing bankers. Hashtag winning. The company is privately valued at around $30-31 billion.

San Francisco-based Airbnb is laying the groundwork for a direct listing rather than an initial public offering, according to people familiar with the matter who asked not to be named discussing private information. Airbnb declined to comment.

On Tuesday, hundreds of venture capitalists and executives from private companies will meet in Silicon Valley to discuss the benefits of direct listings. The event is sponsored by 12 venture capital firms and will include Mike Moritz of Sequoia Capital, the biggest venture capital backer of Airbnb, Benchmark’s Bill Gurley and Spotify’s Chief Financial Officer Barry McCarthy.

The fundraising round began in June last year, and by September the company had raised $550m from investors including Alphabet’s venture capital arm, GV. Those shares were sold at $105 per share, according to regulatory filings.

With an additional $450m in funding now secured, the company has closed the round to new investors. Airbnb declined to answer questions about the identity of its latest backers.

The funds have been raised at a valuation of $30bn, which is about 25 per cent higher than Airbnb was worth following its previous fundraising in 2015 and makes it one of the most highly valued groups in the US tech industry.

The company has raised more than $3.5bn from investors since it was launched in 2008, and its backers include Andreessen Horowitz, Hillhouse, and Peter Thiel’s Founders Fund. 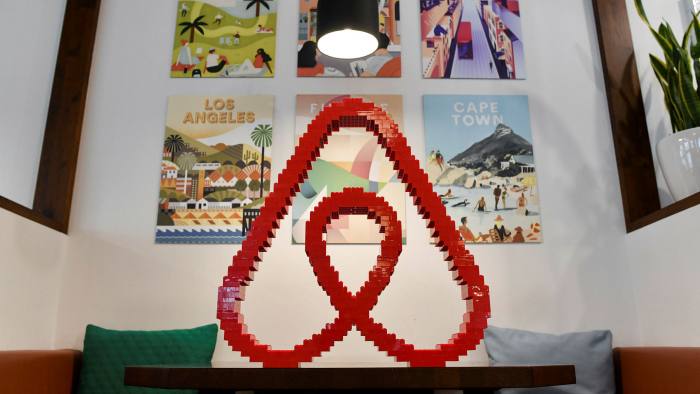 Airbnb has announced plans for an IPO next year; it did not say why © Jens Kalaene/dpa-Zentralbild/dpa

Airbnb encourages hosts and guests to overshare. The accommodation-booking website is littered with reviews extolling that cosy holiday flat in Reykjavik or Manhattan pied-à-terre. Often, vital information is missing, concerning noisy neighbours or a rodent problem, for example. True to form, the US start-up has disclosed more than most rivals would in announcing plans for an initial public offering next year. It just has not said why.

There are several possible explanations for the oddly long-range pledge. One is that Airbnb wants the world to know it is planning to become more transparent. The company has matured from zingy word-of-mouth success to a platform with over 7m listings in more than 100,000 cities worldwide. Critics say it drives up the housing costs of locals and puts hotels out of business. Some cities are clamping down.

A float is eagerly anticipated by investors, despite the tech backlash — and some disappointing US tech IPOs this year. At a valuation of $31bn, Airbnb is one of the largest private companies in the US, behind $35bn payments company Stripe.

Airbnb discloses few financials aside from revenue, which topped $1bn last quarter. It claims ebitda was positive in 2017 and 2018. Most of the money comes from charging a small cut of room rates — about 10 per cent for guests and 3 per cent for hosts.

Unlike WeWork, which postponed its own IPO this week, Airbnb does not have to pay to fit out properties and does not appear to need new funding. It reportedly has $3.5bn in cash. The company is expected to look into a direct listing, in which no new shares are sold.

The most convincing explanation for Airbnb’s slo-mo IPO is that it needs to mollify employees. Like most start-ups, it uses stock options to attract and retain staff. Most US tech options expire after 10 years. Airbnb was founded in 2008. Announcing a plan to list next year reassures longer-serving employees that their wait to cash out publicly is almost over. 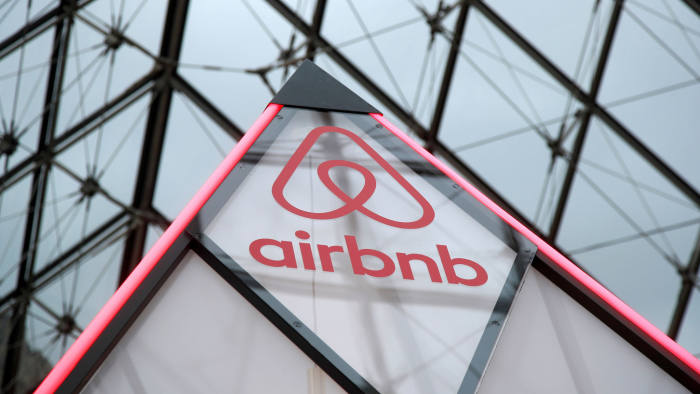 Airbnb is being valued at up to $42bn by investors trying to buy indirect stakes ahead of the company’s planned public listing next year.

Venture capitalists in Silicon Valley and private market brokers such as EquityZen have created dozens of special purpose vehicles holding equity in the home rental platform, according to several people familiar with the transactions.

Investors in these vehicles do not own direct economic stakes in the company but instead hold rights to proceeds from a future IPO or sale.

“It’s the thing du jour, and everyone’s in it,” said Bart Mallon, an attorney at Cole-Frieman & Mallon, speaking about SPVs in general. He said the transactions are particularly attractive to hedge funds as investment opportunities diminish in public markets.

Interests in some of these SPVs have recently changed hands at $150 per nominal Airbnb share, implying that the company is worth some $11bn more than it was at its last fundraising round in 2017, when it raised $1bn at a $31bn post-money valuation.

The San Francisco-based group has said it made more than $1bn in revenues in the second quarter and generated profits in both 2017 and 2018, before including interest, taxes, depreciation and amortisation expenses.

It is also sitting on some $3.5bn in cash, one person familiar with the company’s financials said, providing a buffer in case of losses this year.

People familiar with Airbnb’s plans have said the company is leaning toward a direct listing when it goes public next year. Such a move, which would not rely on bank underwriters to set opening trading prices, could increase the focus on the price commanded on secondary markets for the company’s shares.

Airbnb itself has sought to limit secondary market activity, such as forward contracts which allow employees to receive cash loans against their stock options.

“Airbnb has been explicit that they do not want synthetic transactions occurring in the stock,” said Barrett Cohn, chief executive of the private companies investment bank Scenic Advisement.

The deal comes in time for next year's Tokyo 2020 games, and will cover four more games in Beijing, Paris, Milan, and LA.

Looks like the IPO may be delayed for a while, and that’s without considering the impact of the coronavirus on Q1 and Q2 - if not beyond.

Airbnb racks up hundreds of millions of dollars in losses, considers capital...

Airbnb Inc. has racked up hundreds of millions of dollars in losses this year, as the coronavirus pandemic has wreaked havoc on the home-sharing company's...

Airbnb Inc. has racked up hundreds of millions of dollars in losses this year, as the coronavirus pandemic has wreaked havoc on the home-sharing company’s business, according to a report in The Wall Street Journal. Citing people close to the company, the company is considering raising capital from new investors, and may alter its plan go public via a direct listing, which wouldn’t involve raising money, the WSJ report said. The company is now considering using an initial public offering to raise cash, but the equity market and its finances would need to stabilize and the virus crisis would first need to stabilize before it can go ahead with an IPO, the WSJ report said. The report added that Airbnb was unlikely to attract investors at its 2017 valuation of $31 billion, when it last raised money.

News: First major cost-cutting moves at Airbnb for Covid-19. - Stopped all marketing (estimated $800M savings) - Halted most hiring - Exec salaries cut by 50% - Layoffs could be in play, but nothing firm yet thein.fo/0d8e821b4a44da…
1 Like
next page →