The Sheriff of Nottingham Strikes Again 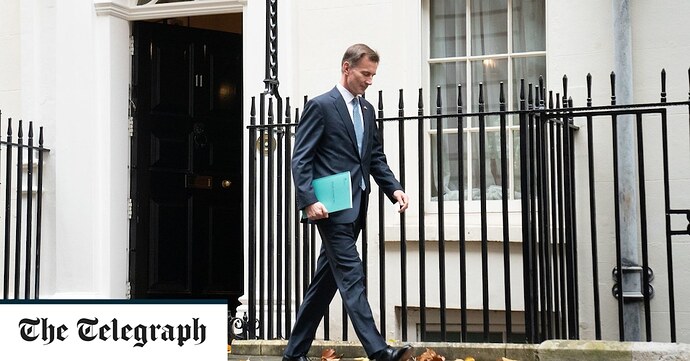 We need to create wealth to build a modern, prosperous economy – not tax it all away

The thing is, Hunt’s budget is kind of like the opposite of what Truss’ government proposed, which had more enterprising elements (eg retraction of IR35 etc) and yet it was hated so much that the bottom fell out of all the markets.

Whatever the budget, nobody is going to be happy.

IR35 was not retracted and the provision made did not have more enterprising elements. The change added to the contractor’s overheads and opened them up once again to tax liability issues.

IR35 was not retracted

The retraction had been proposed by Kwasi/Truss’ government - it was Rishi’s government who did a u-turn on the retraction and on top, have added to the tax burdens regarding dividends, which is how contractors can reduce their tax bills.

You have a misunderstanding. Mr Kwarteng and Ms Truss did not propose a retraction of IR35. They proposed moving the onus back to the contractor increasing the contractor’s overheads.

Maybe I used the word ‘retract’ when I should have used ‘repealed’ but many articles in the press at the time had contractors celebrating, including the contractors we manage (albeit prematurely): BREAKING: Off-payroll IR35 Reforms to be repealed from April 2023 (contractorcalculator.co.uk)

“Today, contractors and businesses will be celebrating as Liz Truss and her government have not only kept to their promise but gone further and repealed a legislation that has had a damaging effect on business and contractors’ livelihoods for the past five years.

IR35 had some of our biggest clients providing blanket determination, giving the contractors no choice but to pay more tax (via PAYE).

I look at the issue in what I consider to be a simple way.

The answer as always been easy for me to find: I want to play for team Robin Hood.

I believe it is important to pay taxes. Each one of us is part of a political community after all. That comes with running costs. Then there is the need to fund a safety net in several respects. Nevertheless the necessary tax burden ought to be within reason, for if excessive it must be considered confiscatory.

The reduction of the personal allowances, in my view, move towards the direction of the confiscatory realm and should not be accepted lightheartedly. It does not affect me, however:

First they came for the socialists, and I did not speak out—
Because I was not a socialist.

Then they came for the Jews, and I did not speak out—
Because I was not a Jew.

Then they came for me—and there was no one left to speak for me.

In practice taxes are being raised. This particular raise does not affect me for my pockets are shallow. But one day they will come for me.

In general terms the markets reacted to such proposal with a clear red card, with the most publicised effect being the plummeting of the Pound Sterling.

Lessons to learn: thou shalt not spend more than you earn forever and get away with it; thou shalt have a balanced budget; thou shalt reduce your debt to sustainable levels…

The way I see it the right approach is:

Hunt’s proposal seems to focus on:

I don’t like it. But markets response won’t be as severe for Hunt as it was for Tuss I think

That is far too simplistic! Some of the “best” places to live in terms of happiness and standard of living are also some of the highest tax regimes eg Scandinavia!

Though as with everything it will ultimately depend on personal circumstances and what different societies want the State to provide.

That is far too simplistic!

It is intended to be simple. It’s a matter of principle.

Some of the “best” places to live in terms of happiness and standard of living are also some of the highest tax regimes eg Scandinavia!

And I think to be best practice to distinguish between tax rates and tax burden, for they are not the same.

And how free people and economies really are

This might be an unpopular, if not controversial opinion, but i’m 100% for this tax raid. I say this as someone who would love more leeway tax-wise (Larger pension LTA, ISA allowance, etc). The govt covid support packages were a lifeline for so many people and businesses but left a massive hole in public finances,

Borrowing at our current debt to gdp might be suicide for our economy long term.

Austerity measures would be unjust; NHS workers continue to be grossly underpaid, other public workers seem to be endlessly on strike and i cannot imagine welfare is enough to survive this economic environment. I personally dont see room for cuts.

I’m definitely frustrated about the cgt, dividend, income, etc tax hikes. Hell, my dream would be a doubling of the ISA allowance, but i see being able to save/invest a bit less a year a comparably small sacrifice. The govt has to raise many somewhere, and i take solace in the fact the less fortunate seem to be not forgotten about in these tax raids (NMW rise, NI freeze, etc).

My wife benefited greatly from the furlough scheme so I already knew we, as a country would have to start paying it back at some point, so I would rather get it paid back now rather than some long distant future when the country doesn’t have any spare cash floating around.
The stealth tax, as i see it, is the local councils/unitary authorities imposing the harshest of increases. Those who are most vulnerable will suffer the most I fear.

Hi - I understand where you are coming from and why you have been misled. It is very very easy to get confused by the article you reference. As I said IR35 is not retracted nor is it repealed. Notice the word “Reforms” in the title? Yup, It is the reforms to IR35 that Mr Kwarteng wanted to repeal not IR35 itself. The bit that was proposed to be repealed was the off-payroll changes (i.e. so the onus being moved back to the contractor).

The website you reference has another article published 3 days later Off-payroll repealed – but IR35 still lives after April 2023 which makes things clearer.

I obviously didn’t explain properly as of course I didn’t mean to insinuate that IR35 itself was going to disappear - I work in recruitment so should be looking for another job if I didn’t know IR35 is here to stay for now!

I was just saying that the announcement by Kwasi was more enterprising than Rishi’s U-turn announcement, leading to contractors celebrating one minute and then still unhappy the next.