The ROBO Global® Robotics and Automation GO UCITS ETF (ROBO) is
designed to track the performance of the ROBO Global® Robotics and
Automation UCITS Index (the “Index”).
ROBO is an Exchange Traded Fund (“ETF”) which is tradable by investors
on stock exchanges intraday and can be created and redeemed directly
with the Issuer by Authorised Participants. ROBO is authorised and
regulated as a UCITS and is eligible for investment by other UCITS.

That’s already in the app 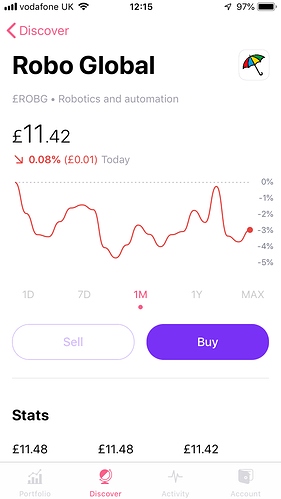 Can anyone tell me some differences or pros/cons for each of Robo Global (robg) and Robotics (rbtx)?

Overall quite similar distribution from a country perspective. But robg has a TER of 0.8% and rbtx only half that with 0.4%.

I’ve just spent some time researching the differences between the L&G and iShares versions, and went with L&G.

The iShares version seems to be much broader, with Snap and Apple as top10 holdings for example, while the other looks much more focused on companies which have robotics as a primary revenue source.

Would like to hear any arguments for the iShares version, apart from the 0.4% difference in fees

So far 3 months in, performance is identical

You should have received a message in app not to long ago about it.

L&G ETFs are in plus, Vanguard, iShares, and Invesco are in the standard account 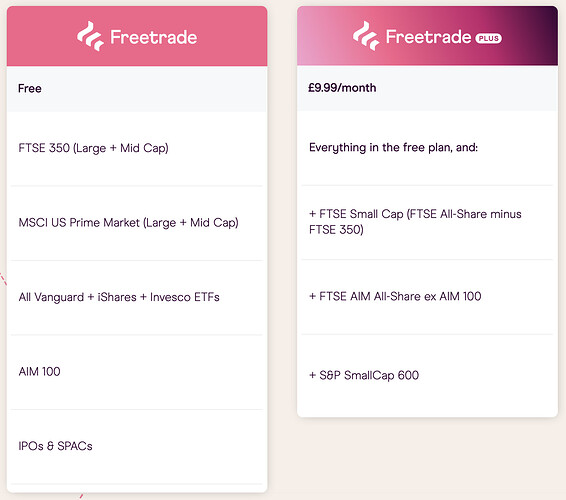 This was covered a few weeks back specifically for ETFs

Going forward the Free plan will include any available ETFs managed by:

Anything not under iShares, Vanguard or Invesco will go into Plus

Oh right, no I havent seen this okay. Thank you

Yeah, What I don’t get is that these were available in ISA and now it’s behind a paywall.
I thought Freetrade plus was supposed to add new shares, not to make existing ones paid.

They’re still available in an ISA you just need plus.

I thought Freetrade plus was supposed to add new shares, not to make existing ones paid.

It’s a fair question, there’s a lengthy discussion on the reasoning for the format. The short answer is no. They also discuss it in the AMA Freetrade Plus — Community AMA, October 2020 - YouTube

Didn’t realise the AMA was finally out. Thanks for the link

As I got an account mid November and first invested on 30th November, I guess I must have missed that notification and was not aware of them going to Plus either. I just noticed them being Plus and found it odd, as I own some but don’t have Plus!

This doesn’t produce a div yield even tho the details says it does. It’s an accumulative etf not a distribution one

The companies in it still have an aggregated dividend yield. It’s just not paid out. I actually like that they included this even for accumulating ETFs.
It’s not a bug but a feature.