I went for option 1

Well i lost a ton on DT but you have to take the rough with the smooth i suppose. Im in again but for a far lesser amount this time - hopefully the rumours of other potential buyers will come true…

the board should be pushing back unless it is an amazing offer, there is plenty future growth left in cybersecurity 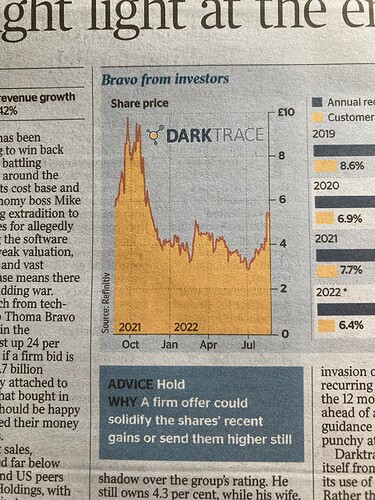 image1920×2560 862 KB
From todays times the article finishes by saying adding dt to its stable of cybersecurity assets would provide thoma bravo with plenty of opportunity to strip out costs,an opportunity that won’t go unnoticed by larger rivals.
bitflip 24 August 2022 12:17 588

The penultimate paragraph in https://www.thetimes.co.uk/article/darktrace-sees-bright-light-at-the-end-of-the-tunnel-kwgbg3qpp says

Yet Darktrace is a less mature business, posting faster recent revenue growth but with a shorter proven record. The downturn in tech valuations in the face of sharply rising inflation could also prove an additional justification for a less meaty takeover premium.

This is the issue here for both present share holders as well as prospective buyers. They (the buyers) have to be willing to inject a lot of money in the company. From a pure tech perspective much of what Darktrace does is done by others anyway. So the reason for other companies (I don’t mean vc’s etc) to buy Darktrace is very little to do with technology and a lot more to so with its standing customers. For Thoma it is not quite so - it can build up Darktrace (and even make it successful) as it has the money to do so.

“We are under no pressure financially to dispose of the company to any outside party.”

Could be a negotiation position.

Darktrace not looking to sell up or sell out | Business Weekly | Technology...

Cambridge-gated cyber security world leader Darktrace is under no pressure to sell despite a surge of interest from prospective US buyers prepared to pay billions. A source close to the business told Business Weekly that Darktrace did not invite a...

Further to the announcement made earlier today by Thoma Bravo that it does not intend to make an offer for the Company, the Board of Darktrace confirms that discussions with Thoma Bravo have terminated.

The results look pretty good and in the long run not being taken over may be a good thing for share holders but I would expect the price to lower today on the no take over news.

Good news that there was interest and just solidifies Darktrace as a long term hold for me. Might actually top up today with the drop.

You must be smiling today :). It is very interesting where the price has dropped too and the most it rose to before. It should make people think. With the falling pound there might be some more bids but as I said before these will be ‘customer-acqui’ centred not technology driven.

Interview with Poppy Gustafsson in this is money in mail on sunday. 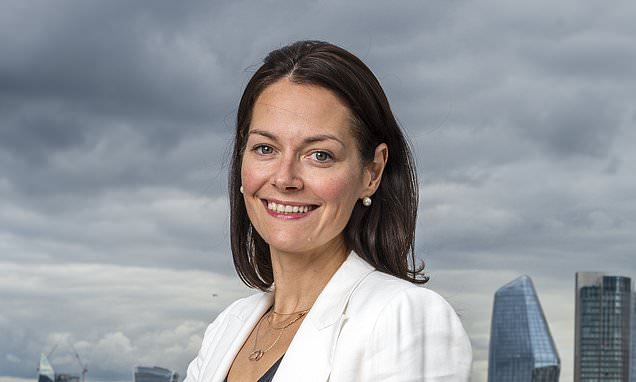 Gustafsson could hardly be further from the old stereotype of a chief executive, being neither pompous, portly nor pinstriped. 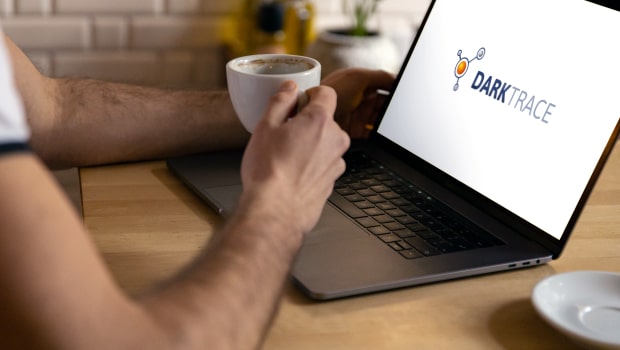 Cyber security firm Darktrace said on Monday that it had seen "strong demand" for its new PREVENT product family as more and more organisations sought to prevent cyber-attacks.

Disappointed to be sitting in the red with this one. Hopefully some green in C23

it’s a relative new player so for me it’s a long term HODL!

Analysts at Morgan Stanley upgraded their recommendation for shares of Darktrace from 'equalweight' to 'overweight', arguing that the "broader growth story remained intact".

Read in the guardian yesterdasy getting shorted! can’t be good! 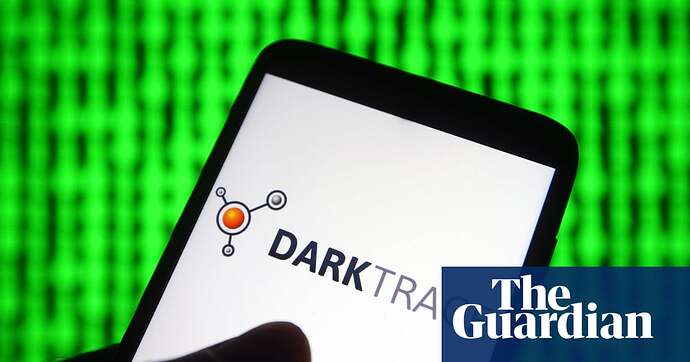 Company co-founded by Mike Lynch hit by wave of criticism of its sales, marketing and accounting practices