Just to be clear, it is the case with every UK broker, not just Freetrade.

It’s one of the most oversold big cap Chinese Stock now along with Alibaba. Bargain or falling knife? 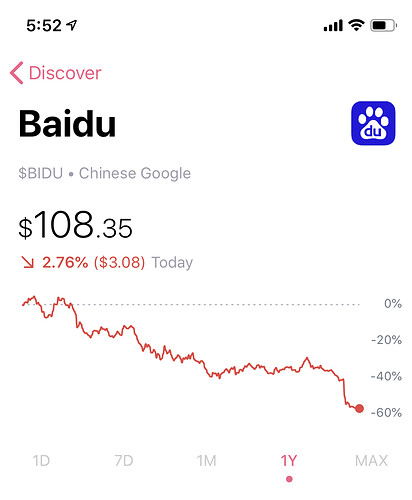 Always do your due diligence, etc etc

Baidu to sell $1bn of shares in travel website Ctrip

China’s search engine giant Baidu is selling roughly $1bn of its shares in Ctrip, China’s largest travel-booking website, bolstering its cash on hand after a difficult year for profits.

Ctrip, which owns UK flight search engine Skyscanner and is known as Trip.com outside of China, announced on Wednesday in a stock exchange filing that it will sell 31.3m of its Nasdaq-listed shares that are currently owned by Baidu. The sale makes up a third of Baidu’s stake in Ctrip, and Baidu will remain its largest shareholder after the sale.

Baidu has struggled to maintain its position in the “tech trinity” of China’s most-valuable tech companies alongside Alibaba and Tencent, who were faster to adapt to the mobile age. Its profits have suffered in recent years as a result of scandals over medical advertising and falling advertising revenues.

In May, the company reported its first quarterly loss since listing in New York in 2005. Cost-cutting helped the company return to profit in August, but its net profits were still down 63 per cent on the previous year. 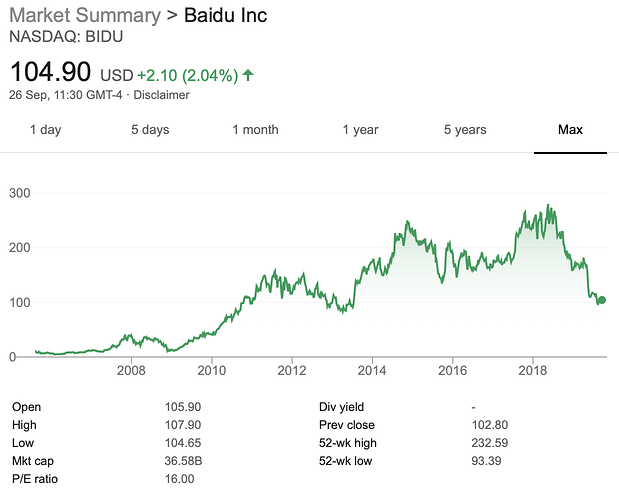 I bought BIDU near those peaks. Down 55%.

You could buy ETFs or Investment Trusts that contain these shares. Not perfect, but it’ll give you some exposure.

Baidu’s reputation is really bad even within China. And they’ve been lacking of innovations ever since they become dominant in search market in China (and it’s a big factor when Google’s not competing in the same market).

But even that is becoming less and less the case nowadays because people are just using apps, e.g. WeChat, TouTiao (by ByteDance), JD, TMall, where Baidu has very little success.

They don’t have much play in e-commerce, payment or social media where these are all dominated by other big players like Alibaba, JD.com, Tencent and new challengers like ByteDance. I think they do have some investments in JD.com and maybe some other smaller e-commerce companies but I don’t think they are in controlling position.

They’ve got an “open source” EV platform but again, I don’t think it’s gaining any traction. They’ve also got something like an AI “brain” a couple years back in their Silicon Valley lab but haven’t heard anything about it in the past year.

I’d ask the question “are there no other better Chinese companies to invest in at this point”?

I have read a little about meituan-dianping which is really eating in Baidu’s market share and is still a newish company do you know anything about them?

Hi, I’m not following these companies WRT to their financial positions but I can give my two cents from the consumer’s point of view.

Meituan.com (started as “Groupon” of China) and Dianping.com (which means “review” in Chinese and dominate that market in China) used to be two companies and by no means were small players in their respective fields before the merging. Their CEO, Xing Wang, is a quite famous entrepreneur. He founded the “twitter” (FanFou.com) of China years ago but banned by the Chinese government (it’s still alive today but it lost its chance to go big because of the ban), for the obvious reason, and that’s essentially the start of the “Weibo.com” (listed on NASDAQ) as well.

It’s true that they entered the food delivery market after Baidu, but I think they are better positioned and they’ve got a much better CEO to execute their plan. Baidu used to be invested in a big competitor of Meituan, called “eleme” (“ele.me”, which means “are you hungry” in Chinese) but I think they sold their stake (not sure if it’s all of them or not) to Alibaba and started their own food delivery business.

I don’t order much takeaways when I’m back in China, but I do see Meituan’s delivery men much much more than Baidu’s. In fact I can’t remember seeing any of Baidu’s delivery men.

Baidu is pretty much known as just a “search engine” company in China and they’ve not been very successful in other areas and I think it’s largely down to their CEO being too comfortable and lack of competitions in their own market for too long.

US has “FANG” or “FAANG”, China has “BAT” (Baidu, Alibaba and Tencent). People have been saying that it should be just “AT” or something else + “AT” now. You can see why by just comparing the market cap of these companies.

Baidu said first-quarter revenue fell 7 per cent from a year earlier to Rmb22.5bn ($3.2bn) as advertisers in travel, autos and healthcare cut back on spending during the public health crisis. Revenue at its core search and news feed business fell even faster, sliding 13 per cent from the same period last year.

“Universal search is facing a growth bottleneck as traffic stays locked inside apps like WeChat and Douyin,” said Alex Liu of China Renaissance. “It’s inevitable that advertisers will continue to migrate to mobile display ads in those apps.”

What has happened to Baidu in the past two days?

My guess would be something to do with this: 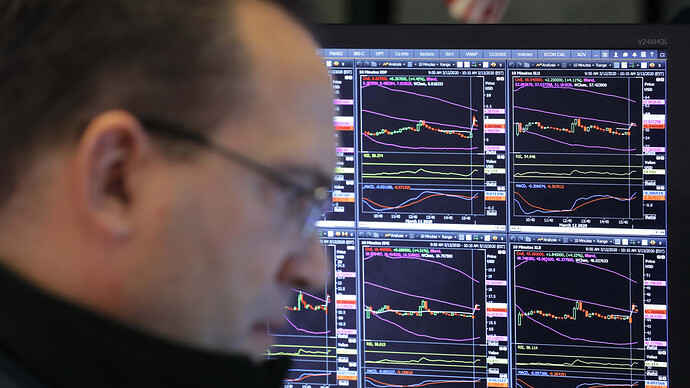 Alibaba and Baidu were among the Hong Kong shares that tanked after the U.S. SEC adopted a law which could lead to de-listings for Chinese firms.

Please could the @Freetrade_Admin team have a look at allowing us to buy Baidu through our ISA’s?

A few competitors have this option so I thought it was worth the question!

@Rajan07 @mynameisgeraint Might be able to share some insight as to why FT have this as non ISA.

Thanks for flagging, will look into this with the team and get back to you.

Hey Rajan, please could you provide an update on Baidu and potential ISA & SIPP availability.

I’d love to own the stock, but I only invest through my Freetrade ISA & SIPP!

Hey Lewis. How are you?

Apologies for the delay in replying, I’ve been away and back in the office today. I’ll look into this and get back to you.

@LewisHarding - a quick interim update, can confirm it’s something that we’re looking at offering and will update when there’s news.