Not if they closed their old shorts at a loss, then opened new shorts at $450.

Exactly, which is why its anyones guess. However, with the amount of hype generated around this stock would you take a short position at $450 and expect no one else to enter the stock and drive the price up? The ladder attacks have to stop at some point and when that happens the price will rise to true (inflated) market value.

Only if they sold today (and bought in the last week). 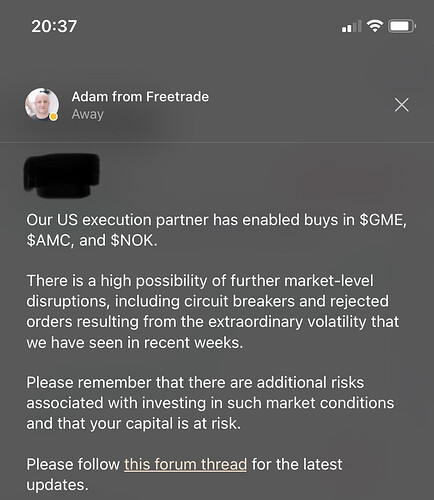 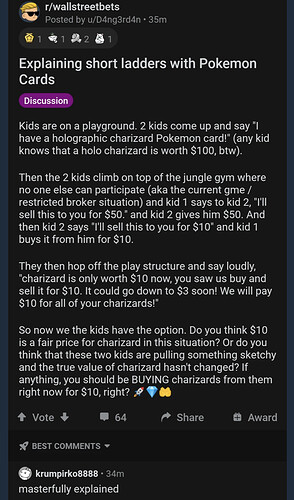 I read a couple of long books in investment before I started around the end of last year, however the best investment knowledge I have so far it’s from the kids in WSB

I don’t get why some of you find all this funny, it’s absolutely disgusting, when everyone thought it was freetrade pulling the plug on buying certain trades the angry posts were thick and fast now we know it’s the big cheeses manipulating the whole market everyone seems fine with it.

No I haven’t lost anything in the current climate but it just pisses me off that once they get fed up they can just take their ball in.

I think most people who were on FT before last week appreciated FTs was of communication and dealing with the situation. There were people who came running from t212 and others where they were blocked from trading GME etc, whereas FT was still allowing it. So those people were rightfully disappointed when they saw that this route was blocked off as well. It was their only reason to come here. Without this gamestop spectacle, they would have stayed with t212 and co. Nevertheless, gentle debate is always nicer.

Ok, so let’s say they set their short at $20. So for them to profit, the SP should fall quickly under $20 or they make a loss. For every day they do not settle, they pay intrest. What numbers are we talking about? $1 a day per stock?

I’m not fine with it but what are non-US citizens supposed to do about the likely corrupt market over there? (Go Bernie!?)

Freetrade have proven to work hard to find solutions and are transparent with their customers. That earns them some support from me. I hope they can learn some lessons and maybe find some other partners to smooth things out in future. Might need to introduce fees but I’d be ok with that tbh.

There’s a quote in this brilliant NY Times piece that encapsulates the thinking of most of these rookie/Reddit traders:

“For a little while, it was just free money for everybody.” 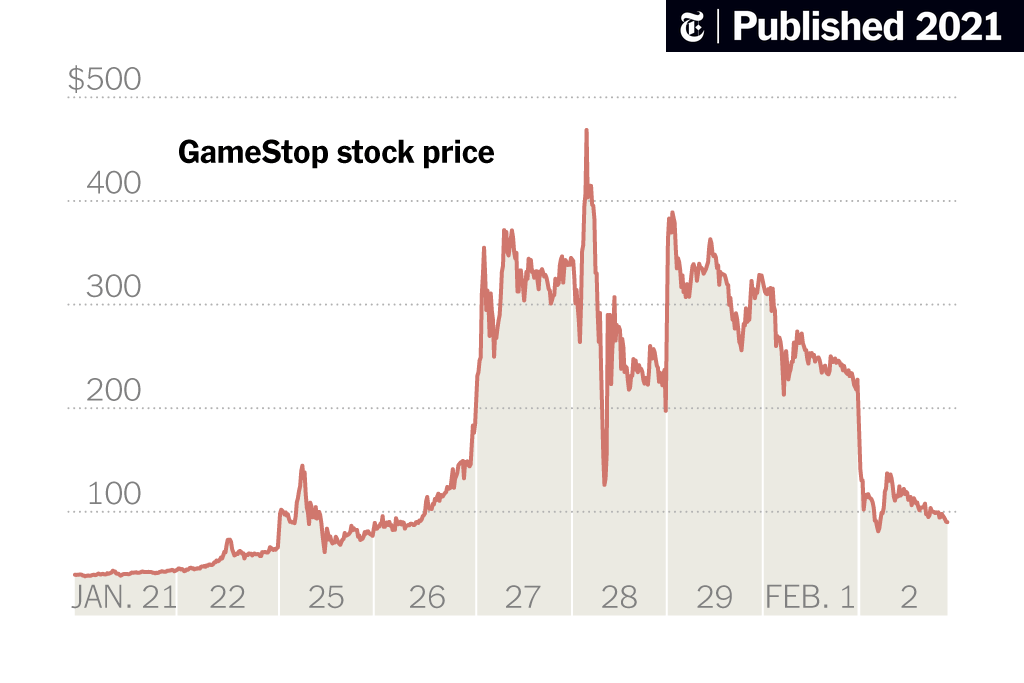 Plunging GameStop Stock Tests the Will of Investors to Stick With the Ride...

After a crazy run-up, the price dropped 72 percent over two days, putting it just 18 percent higher than it was at the start of last week.

Freetrade have proven to work hard to find solutions and are transparent with their customers. That earns them some support from me. I hope they can learn some lessons and maybe find some other partners to smooth things out in future. Might need to introduce fees but I’d be ok with that tbh.

Ok so , Drivewealth should at least explain what they’re doing without vague this legalese stuff Disclosures & Disclaimers — DriveWealth Legal Hub

They own this broker they use now. And that broker can pass on to bank of america or whoever. What happens next god knows.

IMPORTANT: Why we had to limit the US market on 29th January (not our choice and we engineered a solution) Freetrade Chat 🔥

Driverwealth owns Cuttone & Co. the broker. Cuttone’s SEC 606 report shows the order flows http://public.s3.com/rule606/ttuc/ It says the largest one been via BoA securities which is bank of america. I don’t like BoA - they’ve previously secretly sold to Citadel and many high frequency guys… Cnbc on 23 March said On Friday, the attorney general announced a $42 million settlement with Bank of America over what it called the “masking” strategy, which was applied to 16 million client trade …

Ok so , Drivewealth should at least explain what they’re doing without vague this legalese stuff Disclosures & Disclaimers — DriveWealth Legal Hub 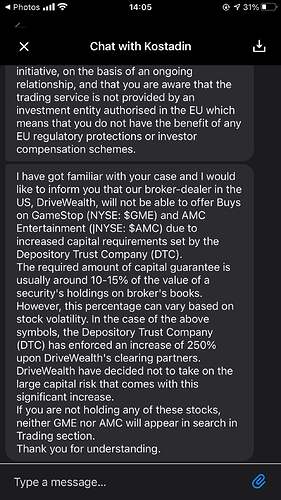 Increased capital requirements isn’t legalese, imagine if you had to find and transfer billions of dollars immediately. I mean FT was back online like 5 hours later so they managed it but its not easy probably. Robinhood had to get the money from investors, Drivewealth who knows.

You have missed the point so badly

Not at all. If it was free money, everybody would be rich – or at least have the sense to know when to take profits.

i agree… many people have missed the point.

Just heard an old boy on LBC going on about how these retail investors have lost loads of money that they got from their stimulus cheques… he also blames the “apps” reddit and robinhood… so kinda shows how much he understands.
Its simple, if it was about making money one of the users would have cashed out at the 44mil profit he’s made… but he’s still holding. If he sold… he’d probably be under investigation himself by the SEC.

people have pumped money in knowing they are going to lose it!

The ones who started the movement did it knowing they stood to gain financially as well as morally. Just because they use Reddit you for some reason assume they are young and naive. Some of them are incredibly smart and savvy
News flash - they have been cashing out steadily since mid January and will probably never work another day in their lives.

The redditers who hopped on the stock late January are doing it for various reasons, none of which are financial gain. The ones who are buying for financial gain are typically not part of the Reddit community, they are normal people hopping on a bandwagon that doesn’t exist hoping to make a quick buck.

By now I’d expect they have cashed out at a huge loss and I’m glad.

The person I highlighted in the original post clearly wasn’t savvy, but appeared to have jumped on the bandwagon. Half of the $40k he invested came from his retirement pot, yet he didn’t have the sense to cash out when he was $80k up. That to me, says it all.