What are we looking at there? aren’t all the 100’s because Robinhood has now limited it to 100 shares max?

Ok so does the fact that we can’t buy GME on Freetrade anymore indicate that there’s still something left in all this?

Last friday when FTrade and Rh weren’t allowing to buy, it was a sign y’all should have been selling. Like protecting the users

Now the prices are even worse as the baloon has popped… onto the next thing!

The 100’s have been there throughout. The limit has varied and trading has even been halted on most platforms and the 100’s persist. No advice either way here, just sharing the info

It all depends on the short to float ratio.

Following the short squeeze thesis, as long as the short to float ratio remains above 100% the importance of fundamentals is on hold, because shares become theoretically priceless

We can guess for months whats happening but data companies like D E SHAW, Virtu, Citadel, the list goes on - they got data alright - they know the directions of momentum. They buy our trading flow. They actually ride to the moon every day.

I wanna ride to the moon but I’m not Virtu.

All trading apps use Citadel by u/CardinalNumber Investing and Markets 📈

https://www.reddit.com/r/RobinHood/comments/l80dza/what_is_citadel_and_where_do_i_go_to_get_away/ An eye opening post from the author a former moderator on Reddit r/RobinHood (" I worked for a market analytics/quantitative research firm in the city that was eventually gobbled up by Virtu.") My current day job makes trading public companies complex (which is why I only talk about algotrading ETH on Discord). If IEX was larger, that would be a decent alternative for equities but they don’t h…

Buy in EToro I did

They can be happy they were a part of history. (i’d be crying).

So if no sorting allowed anymore, does that mean no new short positions allowed or do all existing shorters have to settle today?

The stonk is literlly called gameSTOP. The writing was on the wall!!

This was the market last week: 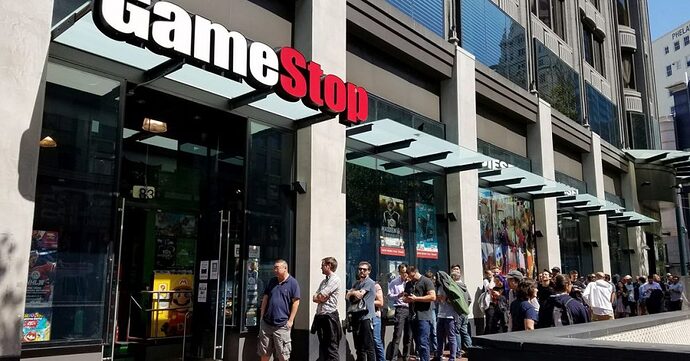 No new shorts are allowed. Existing shorters are already committed and do not have to settle today or tomorrow (when the ban comes in to effect). Ladder attacks will still be present as this is just small volume of stocks constantly being passed between each other.

Keep an eye on volume.

When is thing actually happening?
I’ve seen that their shorts expired on Friday but nothing happened.
Then it was that shorts have 2 days to start cover but the price dropped because of the so called short attack.
Then we’ve got to bare in mind that it’ll take a certain amount of days to cover…
I really want the retail investor to br right in this, but the longer it goes onim starting the think the hedge funds have your pants down. PLEASE TELL ME IM WRONG because the last few weeks have been really entertain tbh.

GME enthusiasts please don’t shoot the messenger and feel free to offer your own interpretation, this is just my personal theory of what is happening.

Fully agree with everything you’ve just said. I’ve been thinking the exact same thing! There’s so many smart and logical theories/explanations go around, I think I just want them to be right!

It looks like the frog is slowly being boiled today

I don’t think anyone knows for sure. It certainly doesn’t feel over with new capital requirements* (from 5% to 250%?!), 95% bots (getting banned mind you) pushing other stocks or sowing doubt over on WSB, the short ladders in the market and the misinformation campaign - who said silver…? No one.

I don’t really care if the squeeze happens but I’m sold on the ‘corrupt to the core narrative’. Better to be fined for bending the rules than lose (more) billions.

So, I think a squeeze may still be on the cards. Financially I don’t really care, but on principal I hope it happens.

On the flip side, maybe the squeeze happened and the aftermath is to feed the conspiracies

*As I understand it, these capital requirements are set by a regulatory body (the NSCC) that is not a government agency but a private company owned by the brokerages and the banks as a self-appointed securities regulator… The DTCC parent company has seemingly been unsuccessfully sued in the past for letting naked shorts go unchecked (see the NSCC wiki page).

You make a good point …

I joined reddit a few days ago because I wanted to see what was happening and its so easy to see that silver is NOT a WSB push. It’s 100% made up by the media. It’s honestly not even difficult to check either, which really baffles me. But that just makes me question everything else I see…

But if they don’t have to settle today, they can wait longer for the price to come down. There is no counterpart for people who are hoping for a rise. So people who hold the stock (or want to buy) are at a disadvantage. Shouldn’t the stock be suspended completely to work out a solution that works for all brokers?

For those of you that believe Reddit is currently generating it’s own hype out of thin air and the hedge funds have already managed to squeeze their way out of the short positions that they found themselves in please take a couple of minutes to watch the following link:

There is so much money involved that any form of disinformation campaign involving the mainstream media or social media is well within thier sphere of influence and the cost of doing so is nothing compared to what they originally stood to loose. If this causes a few shareholders to sell it’s a big win for them.

Weather this is still the case is anyone’s guess but dont just instantly rule it out as hype. This is unprecedented and anything can happen. Majority shareholders are still holding stock and if they dont see a reason to exit thier position despite huge gains over the last month that begs the question of why?

The longer they play the ladder attack game the lower the share price falls. The catch from thier point of view is that for every day they dont settle the outstanding stock that has failed to deliver (shorts) they must pay interest on them.

GME was shorted to over 100%. With the volume of stock that was shorted the daily interest is very, very high.