So the deadline for the securities lending is June which happens to be tomorrow. This is sort of a reminder of the deadline.

It’s also a oppurtunity for me to enquire whether you have signed yet, or not, or plan to?

I’ve agreed to the new terms quite a while ago

Yes, it adds risk that wasn’t there before. But I am confident that Freetrade will either share revenue from stock lending with lenders in future, or will provide something else that I value.

In the app. If you’ve not signed then there will be a yellow box below the graph. If you have signed then nothing else to do.

None of my family have agreed to the new terms. Think we’ll try out Lightyear or Orca next time we want to buy something.

Lightyear is great and cheap for US stock. The app is so much better than freetrades.

If the thread is account securities lending Lightyear use don’t have their own tech so instead use an API from Alpaca. I believe Alpaca will lend holdings in the same way Freetrade plan to and as Lightyear have no ISA you have no way of stopping this.

Similar, although because I don’t have enough money per year to contribute to both an ISA and a GIA, I had planned to make the ISA my lion’s share anyway.

Securities lending has been postponed… 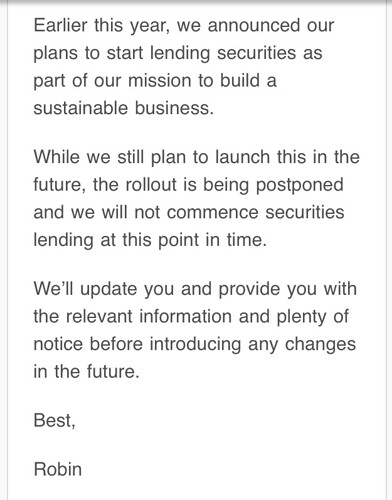 As an investor, I’m not sure how to feel about this. I think securities lending is perfectly reasonable, so I suppose I’m a little concerned to see a potential revenue stream shelved.

I get that but it might be for the best because the discussed version was lacking in comparison to other brokers, then there was the backlash, maybe some big accounts even transferred away citing the change. The email is light on details so who knows.

my concern is with the continuing lack of transparency from FT who appear to feel they have no obligation to explain anything to shareholders let alone customers.

The only reason it’s been indefinitely postponed is because they aren’t capable of delivering it.

I would be quite concerned if they go ahead with this. You buy the stock and they lend it out to short sellers who will profit from price declines. Short sellers are there to trash companies share price- sometimes they are justified in doing because they have identified fundamental problems like with Enron- other times it’s looking to kill growth companies
The ultimate objective for any short seller is to see the company fail- if your company is strong enough and you are happy to stay invested long enough so that short selling driven declines don’t matter that’s one thing.
Ocado is one stock that has been heavily targeted by shorts. They recently raised at a lower amount so the dilution was higher. Blue Prism was another target which resulted in it being taken out at a bargain basement price
There’s a reason why the likes of AJ Bell and Hargreaves pledge not to lend out customer securities. It is very hard to see that it is in the customers best interests

Unfortunately this is most probably the case…

The damage is done in terms of users put off by share loaning as they would have already left Freetrade, and now Freetrade won’t even monetise the users not fussed with the change in Ts&Cs

No, short sellers are not interested in destroying companies, they are interested in making money from the stock market, just as you are. Short sellers have a purpose in the market, they are incentivised to find out when things are not working or when the the proponents of a stock are misleading investors. It’s in the market’s interest, and by extension customers interest, that someone is playing Devil’s advocate.

Personally I think short selling should be banned as i know its a legal way to make money but it does damage some businesses and the sooner we follow other countries and ban it the better it will be.

If I am long on a particular stock, why would I want to support those that are short when there is nothing in it for me.
If I run a growth fund, I can make money lending stock to short sellers. You want me to do it when it is against my own interests and I get nothing in return.
Not all short sellers are the same. As I said some serve a useful purpose. Others want to destroy growth companies or emerging biotechs. Some short sellers actively target companies trying to develop cancer drugs or other urgently needed therapies. And the best payout they can get are when the companies go bust