The era of non-stop stimulus

Interesting article in the WSJ today. It made me think that Modern Monetary Theory (MMT) seems inevitable at this point, only question is how long until we get there.

How are you planning to navigate the world of non-stop stimulus?

Opinion | Welcome to the Era of Nonstop Stimulus

As far as I can understand it MMT it’s like candy for diabetics: poison. It tastes good while it’s in your mouth but it will claim your eyesight and your feet if you overindulge rather than being moderate

Modern Monetary Theory (MMT) is a macroeconomic theory that says government spending in countries with complete control over their own fiat currency should not be restrained by fears of rising debt.

A simplified explanation of MMT - what it means for government borrowing, inflation, fiscal policy and monetary policy. Main areas of criticism. Can it enable 'free spending? 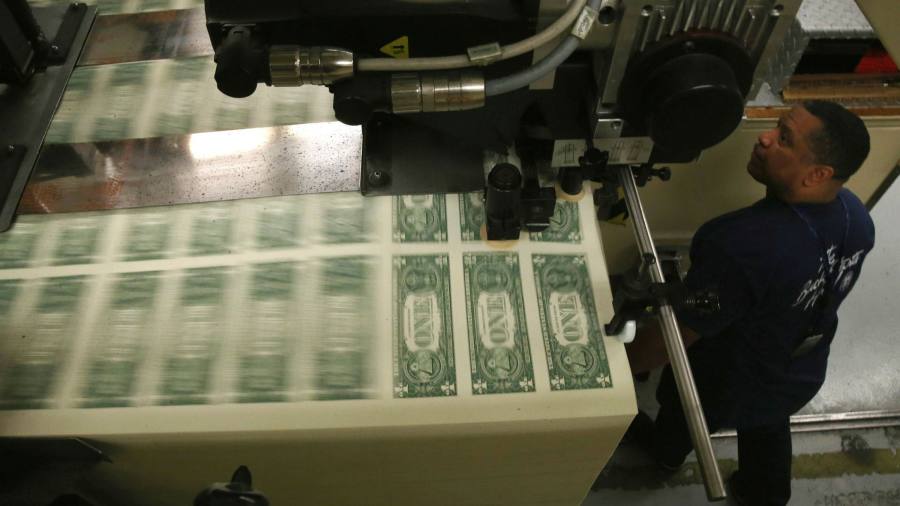 “Modern Monetary Theory” (or MMT) is a new approach to monetary policy that advocates argue justifies massive government spending programs, including “Medicare for All” and the “Green New Deal.”But what is MMT, exactly?The core proposition of MMT is...

Modern Monetary Theory and the crisis of capitalism: Part one

Modern Monetary Theory is the latest in a long line of attempts by “left” theorists to maintain that capitalism can be made to work for society if only outmoded thinking about the monetary system is abandoned.

The Use and Abuse of MMT - Prime

After being attacked by monetarists and others for many decades, MMT and the idea that running government budget deficit is stabilizing instead of destabilizing is suddenly gaining applause from the parts of the political spectrum that long opposed...

The ideological bankruptcy of modern monetary theory | The Spectator

If you can’t explain something, try an abbreviation. The latest in economics is MMT — Modern Monetary Theory or, in other words, a magic money tree. It’s a simple idea. It costs almost nothing to print money: the cost of printing banknotes is...

How are you planning to navigate the world of non-stop stimulus?

Keep the eye on the ball

The 4 Cornerstones of Generational Wealth |

Traditional estate planning tends to focus on trusts and tax laws – the mechanics of wealth transfer. For your family to sustain its wealth through several generations, it can help to clarify what your wealth means to you, including the non-financial...

This updated piece by The Tax Warriors at Drucker & Scaccetti helps families have meaningful conversations about their wealth.

What's the Key to a Multi-Generational Family Legacy?

​Families looking to preserve wealth are using more formalized processes so they can feel more confident that the next generation will sustain not only their wealth but also their family's legacy. One of the approaches some families are choosing:...

Disclosure: I have Type 2 Diabetes, and there’s no one in the world who loves candy more than I do. Those are facts not open to dispute. It’s just that I like to read and to walk by my own two feet even better

That’s my reading sorted for the rest of the week

Would you agree we are sleep walking towards MMT?

That’s my reading sorted for the rest of the week

Glad I could be of assistance

Would you agree we are sleep walking towards MMT?

Following the global financial crisis of 2007–08, there was a worldwide resurgence of interest in Keynesian economics among prominent economists and policy makers. This included discussions and implementation of economic policies in accordance with the recommendations made by John Maynard Keynes in response to the Great Depression of the 1930s—most especially fiscal stimulus and expansionary monetary policy. From the end of the Great Depression until the early 1970s, Keynesian economics provided...

A lot of attention was paid to the austerity programs that shortly followed this and I think memories are long enough to bear this in mind now. The focus on debt at the expense of the denominator (GDP) ultimately led to worse outcomes in stifled growth.

We also have to consider the social cost, the links between austerity and populism are pretty convincing:

I think there is a pretty credible argument that this was ultimately a significant factor in the Brexit vote.

There is an ongoing debate as to the causes of the UK’s vote to leave the European Union. While much of the earlier literature has focused on mostly descriptive patterns, few robust empirical contributions exist. The rare exceptions are three papers...

Obviously the Debt/GDP figures feel high, but I don’t think the question is “can we afford further stimulus?” but rather “can we afford not to?”. Could cutting stimulus too soon lead to another round of self-destructive populist politics?

I hope that a lot of stimulus will come in the form of infrastructure spending to tackle the bigger challenge we face, climate change. I think the virus is a welcome excuse for significant spending on overdue ‘Green New Deals’ around the world.

All that said question about how the bill eventually gets paid is still pretty worrying, given the state of UK politics it probably won’t be the wealthy footing the bill. While boomers control the vote I don’t hold much hope for a remotely equitable repayment.

I would agree I can see renewables/green companies benefiting from this more than most sectors.

Same with miners/exploration companies who will benefit as a traditional inflationary hedge but also from finding all these metals that are needed for the green revolution.

In general I could see stock markets doing really well in this environment, but this would be countered by heavier personal taxation.

Not as well-read as Raul or Cameron on this, but I’ve put together a short post on MMT.

I don’t mean to be glib or contrarian, but the status quo has been going terribly wrong since the 80s for most people and it’s getting worse. That’s not to say that MMT might not be ‘even’ worse but maybe it’s worth a try.

Something’s going to give eventually. I think even the declining middle class of America is starting to realise that they’re not just temporarily inconvenienced millionnaires after all, hence all mounting misdirected tensions over there.

From a social policy point of view I agree that the current system doesn’t work for a lot of people and things like wealth inequality has only increased.

But acceptance of MMT feels like a big gamble to me. If it goes wrong it’s going to lead to the worse depression for a long time.

But I think you could include Central Banks and interest rates explicitly. They are implicitly included

The increasing use of scientific jargon has permitted the State’s intellectuals to weave obscurantist apologia for State rule that would have only met with derision by the populace of a simpler age. A robber who justified his theft by saying that he really helped his victims, by his spending giving a boost to retail trade, would find few converts; but when this theory is clothed in Keynesian equations and impressive references to the “multiplier effect,” it unfortunately carries more conviction. And so the assault on common sense proceeds, each age performing the task in its own ways.

MMT is just a recasting of a very old lie (monetisation of debt will save us). Whenever this has been tried in the past, it has lead to asset bubbles, then collapse, though often it takes decades to come to fruition.

Indeed the first and archetypal bubble, the South Sea Bubble, was triggered by trying to address huge debt built up over decades by selling shares in the South Sea Company, a company fully backed by one of those governments which print their own debt and can’t possibly fall into default. It all went so well, everyone was getting rich, until it didn’t, then everything collapsed and lots of people lost a huge amount of money. The government debt was effectively shifted onto the population at the time and those who came after, ruining many investors. It wasn’t a pretty ending and is one I’d rather we avoid this time round.

Printing money MMT style is known as soft default - it’s just default by other means - debts are fully honoured, but become worthless because the currency they are denominated in is depreciated. So yes technically you won’t default if you print your own currency, but you can certainly pay creditors with worthless paper - in the end the result is the same.

Even worse, we’re now buying our own debt - this is clearly a fixed market and going to end very badly - the BOE owns 1/3 of the debt issued by the government. If that was fine, why don’t they just buy it all and cancel it? QE was originally supposed to be a temporary and targeted measure, not a standard policy. They have tried to taper the ‘temporary’ QE twice now in the US already though, and in both cases had to back off as it hit asset prices (in particular growth stocks). So it seems we’re stuck with it and it has hit remarkable levels due to COVID.

I’ve nothing against counter-cyclical stimulus, it’s certainly necessary in a temporary way for a year or two during a large knock to confidence like 2008, and austerity in the UK after 2008 was a massive failure IMO, but that’s not what we are seeing now - we have seen permanent ZIRP and QE on a global scale with no end in sight.

I’m hoping they manage to gradually wind down this stimulus and accept the inevitable bear market in stocks this triggers, because the alternative is cranking up the stimulus to unheard-of levels with less and less impact, until one day confidence is lost and every asset crashes.

What if all the largest economies are printing their currencies? This would dampen the impact of devaluation?

Not really. They would all be devaluating still. If anything they will dampen the relative relationships between each other. But purchasing power would go down on all of them, not softened