CCIV - the merger is happening!

Want to get everyone’s view on this. Been doing a lot of research around an upcoming merger between CCIV and Lucid. Nothing confirmed as of yet

Does a merger seem likely to you?
I believe CIIV has the perfect background (personal ties to lucid board, lucid hinting at going public) and lucid has great potential (saudi’s pumping $1b into lucid).

Hoping to see a rise.

Let me know what you think

Ha, wish I knew. There is lot of ‘evidence’ on twitter but nothing certain from what I’ve seen, just vague unrelated documents and ‘they didn’t deny it’. It could go either way so not worth being too overexposed. Very exciting company though!

I hope so too, I got in early. My position isn’t very big at all. Trying to control my emotions and FOMO. I’m new to investing and I’m trying my best not to gamble on rumours. Once the merger is announced I’ll jump in bigger.

If you check out the forums on yahoo finance some people on there having been saying the deal is done for weeks now! But I do hope it’s announced soon!

Based on what I’ve read, the merger looks likely.

I think I missed the opportunity on this to get in when the price was low.

How much did you guys pay when you bought into this stock?

I got in at $18, but unfortunately is only a small number of shares as my account is yet to grow being a relatively new investor.

I’m keen on CCIV but honestly I think it spiked because of some rumours they would announce over the long weekend so I’m expecting a sell-off today. Might be good to get in at 35 or so if you believe in it (totally prepared to be wrong

). If it hits 55/60 I’ll be very happy and probably trim down to a small amount just in case it really is the next Tesla (its probably not

I totally agree it’s been built on hype, but the evidence is good. I personally think it will happen but it won’t be for a week or 2 and we will see a drop in price as people get bored of waiting.

Lucid looks like a great company so I’m going to hold. I’m lucky enough to get in at sub $11…

I got in few hours ago and damn it shot up by 30-50% wth is going on, any confirmations on merger? 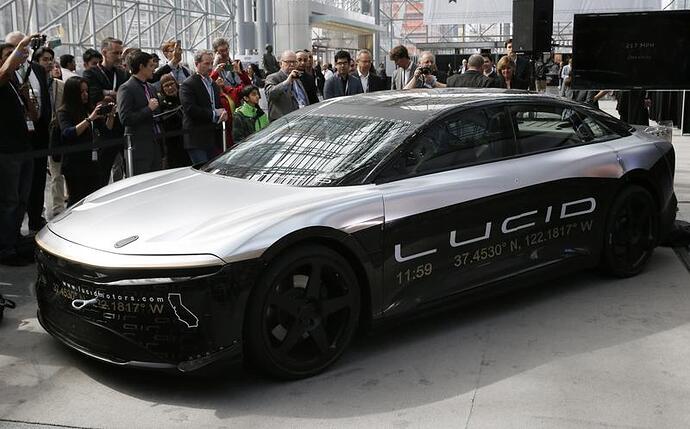 Luxury electric vehicle maker Lucid Motors Inc is getting close to a deal to go public at a roughly $12-billion valuation after veteran dealmaker Michael Klein's blank-check acquisition firm launched a financing effort to back the transaction, people...

This was me with my husband when the price spiked to $55 today!