The poster is a top contributor on this forum. Top contributors post regularly, take part in varied discussions and have high engagement with their posts. The opinions shared on contributor posts are the views of the author only. Remember to always do your own research.

These views are not endorsed by Freetrade and should not be taken as investment advice. When you invest, your money is at risk. The value of your investment may go up as well as down and you may not get back the amount you originally invested.

The Curious Case of Metro Bank

It’s impossible to imagine how 2020 could be worse for Metro Bank shareholders. In 2019, Metro managed to lose its charismatic owner and founder, Vernon Hill, several key members of the board, 96% of its market value and presumably Shirley Hill’s (wife of Vernon) architectural firms key revenue stream…

To most companies, this would mean the end is nigh, but to Metro, it could just be the fresh start it needs. I’ve had a peek in the vaults, here’s what I’ve found:

If there are two things investors do not tolerate at a bank, it’s missing targets and accounting errors. Metro managed to do both in a short period. Falling well short of its often re-asserted branch target was somewhat excusable given the climate. However, when you add to this misclassifying 10% of its loan book, leading to a need to raise emergency capital, it becomes inexcusable. To compound matters, Metro insinuated that it was themselves that identified the error, when in fact it was the regulators. A mistruth told at a time brutal honesty was needed.

Towards the end of 2019 Metro was forced to issue a bond for the £200 million needed to cover capital from the misclassified loans. The coupon price was an attractive 7.5%. Incredibly, with returns on general savings accounts at an all-time low, Metro failed to raise the desired amount of capital, leaving red-faced bosses forced to pull the coupon and rethink, leading an already depressed share price showing hints of recovery to return to freefall.

Bank forced to cancel sale despite offering a high 7.5% rate of interest

Metro then became the UK’s second most shorted stock.

The British challenger bank is now the second most shorted company on the UK stock market.

Finally Metro managed to secure the desired funding later in 2019, with a nose-bleedingly high coupon of 9.5% over 6 years, callable in 5. One of the highest bond issues for a European bank in decades, obviously investors lapped this up and the bond was oversubscribed to the tune of £350 million. Finally Metro had the capital it needed.

Vernon was understandably over the moon - but this was to be short-lived.

Vernon announced his tenure was over, intending to formally leave at the end of 2019. Craig Donaldson CEO, followed shortly afterwards. If you thought that was bad, the FCA decided to widen their investigation into Metro Bank, any share price rise experienced was to be short-lived.

So Who Is In Charge?

Well actually…next to nobody is permanent at the moment! The current board list reads as follows:
https://www.metrobankonline.co.uk/about-us/metro-bank-team/

Pay special attention to the term “interim” it features quite a bit.

Interim Chairman Sir Michael Snyder, unfortunately, does not inspire confidence in the long term. Whilst his biography includes a huge list of achievements including being an advisor to the government. It’s hard to ignore that, despite being a qualified accountant, Metro’s accounting blunders were made on his watch as he served as Non-Executive Director over the period.

There have been rumours and links to ex Tesco Bank boss Benny Higgins, you may remember him as the CEO who spent an average Tesco workers yearly salary (£18,000) on taxis in a mere 8 month period. Whilst undoubtedly a character, I doubt that Benny would lead to a good outcome for the share price, at least in the short term.

We’re unlikely to see a new chairman until the FCA investigation is concluded.

Despite a clampdown on costs, Higgins spent more than the annual salary of a supermarket shop assistant on taxis in eight months

Remember Steve Cohen from the opening? Well, he’s seemingly all but given up on Metro and is rapidly dispensing of his stake.

Billionaire, Columbian, Jaime Gilinski Bacal has upped his stake in Metro Bank, now owning 5.35% of the bank, up from 4.28%, through a British Virgin Islands-registered vehicle called Spaldy Investments Ltd. The Harvard-educated investor financial...

This has led to a somewhat bizarre twist of events, famed South American banker and Colombia’s second-richest person, Jaime Gilinski Bacal, through his investment vehicle Spaldy Investments, has taken up a 6%+ position in Metro, becoming the largest individual investor in the process. Bacal is famed in South America for taking failing banks and turning them around, is he poised for a takeover? Metro would be a prime candidate. 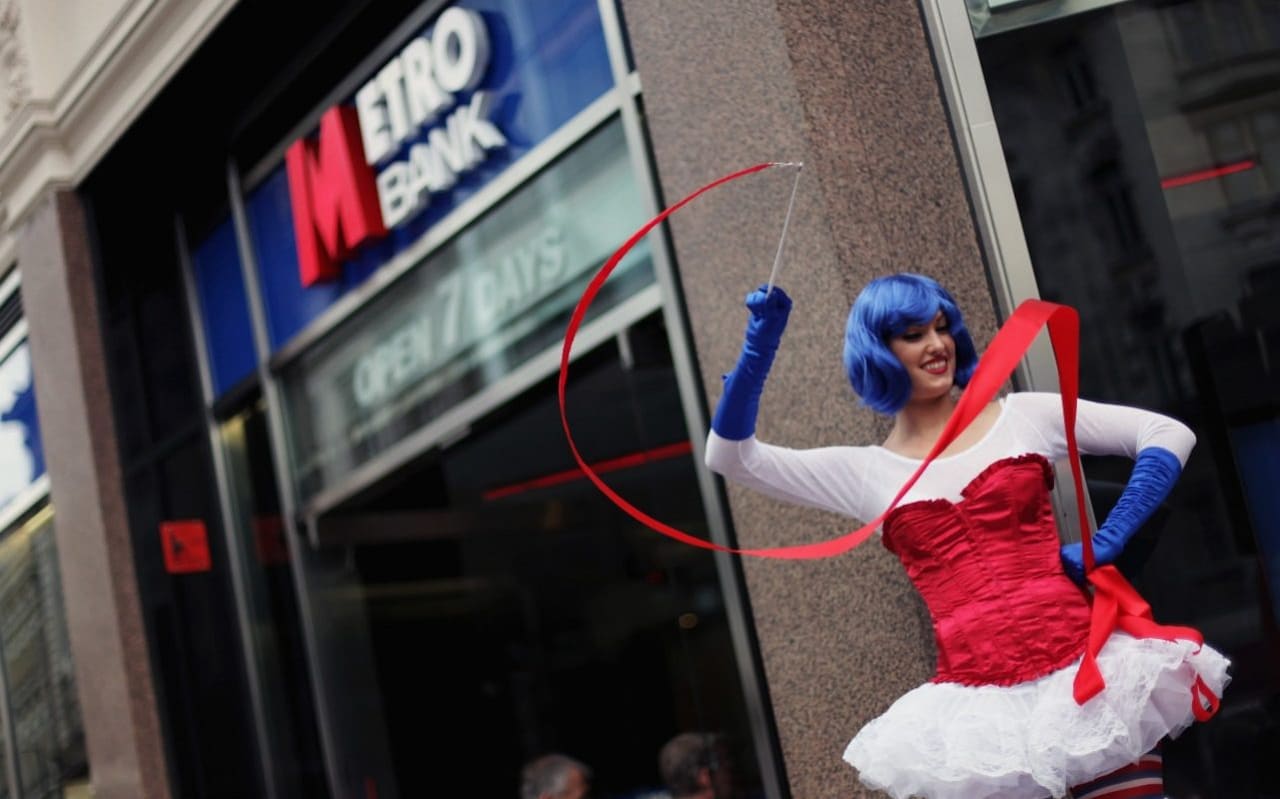 Not just limited to Bacal, Lloyds is also reportedly weighing up a bid:

Metro Bank shares are up on Lloyds Bank takeover rumours. Here’s what I’d do...

And lately, Virgin Money has sounded out an offer:

Mark Shapland at the Evening Standard was last night reporting that Virgin Money, owned by Clydesdale Bank, was circling for Metro Bank. This followed the ES standard report on Friday that Lloyds Bank was considering a bid for the challenger bank. ...

With a price to book value of around £7 as of 2018 figures at least. It makes you wonder just what offer would be on the table for a buyout of Metro.

Whilst all this is going on…

Metro Bank is soon to open its 72nd store in the heart of Manchester city centre on Market Street on Friday 13 December.

Metro Bank opens its 72nd store on Friday 10 and Saturday 11 January in Wolverhampton.

Metro Bank plc today announces the appointment of Sally Clark as a new Independent Non-Executive Director with effect from 1 January 2020.

Metro Bank is pleased to announce that Jessica Myers has joined the Bank in a newly created role as Brand and Marketing Director.

The Bank has partnered with Canadian technology firm Sensibill to offer this new feature which is free and will be available to all small business customers via the Metro Bank app in early 2020.

Metro keeps growing their loan book - up 25% year on year with net interest income up 6% and net interest margin up 23bps. Non-performing loans are steady at 0.17%.

Net deposits are back in growth after the initial run on the bank in 2019 and commission income is up 60%+.

To my eyes, not the signs of business under the huge financial distress the papers would lead you to believe.

Firstly, how do we not have a bull and bear emoticon?

What to take away from all of this…

Well, I’ll have to leave you to draw your conclusions from the information. I think you’ll agree, an awful lot hinges on the FCA delivering a favourable outcome.

But I can’t help but ask myself if I worked for the FCA and I knew Metro was in for a life-threatening kicking…would I join the company as their new risk Director…?

Jose Morago says he's "excited" to get back to the finance industry.

So there we have it, my research on Metro Bank. A little different to the Greatland Gold one, but hopefully no less enjoyable! As ever please don’t make decisions solely on the above information, make sure you do your own research and always fully understand the implications of investing beforehand.

This is a stunning piece! Extremely interesting.

Great article. Now to invest or not invest? I think maybe a small holding may be worth a punt.

I think maybe a small holding may be worth a punt.

That’s precisely what I have done. I’ve either caught a falling knife or bought at just the right time, but as with most of the things I’ll cover - I’d never invest more then I could afford to lose!

Well here’s something I totally missed!

Metro Bank is undergoing a major review of its compliance controls after the lender handled money from Iran and Cuba, breaching strict US and EU sanctions.

We don’t want your sort anyway

Excellent article. I have invested £10k in metro in my interactive Invester sipp, up around 11% but I’m optimistic that the FCA will be lenient, then sky’s the limit.

Now if only Barclays would have a similar recovery, I’m down 10% on my £10k on them! I dont see any recovery until Brexit is over and done with.

I’ve been really lucky with my Barclays purchases. I bought in at £1.47 and then sold half the stake at £1.81. I figured they were undervalued when I bought in, but I was expecting a long term creep with good dividends, not a 4 month turnaround.

With Metro I’ve been buying every time they fell under £2. When they went to £1.70 I seriously doubted my tactic! Doing ok now, similar to you.

Lost nearly half my money (three figures) when I brought it at £5 when it seem to have exhausted with second major fall and sold at £2.8 [what’s worse it went up to £8 as soon as I brought it and I lingered on that sell button one day, but then decided against it thinking I am selling it too soon] so it is no longer for me.

I was initially planning to hold on to it but it just kept falling I didn’t want to risk the capital after a point. I made up the money on a more diversified portfolio but lesson learned to not catch a falling knife no matter how good the bargain looked.

Sudden price changes are about sentiments rather than the underlaying stock and you can’t expect the market rationalise after your purchase, I’d only hold onto losers if I feel nothing has changed from the original investment thesis, as OP said Metro have done things that typically Investors don’t like and you don’t know when will the sentiment will finally change (and at what price)

Metro Bank has today announced the appointment of interim chief exeutive Dan Frumkin as its new boss. He will be paid a salary of £740,000.

Not much to get excited about in the results.

They are also giving back £50m of that £120m Capability and Innovation Fund they won.

£68m written off on discontinued IT work.

Why anyone is holding this is a mystery to me.

Why anyone is holding this is a mystery to me.

How hard have you tried to solve this mystery?

Maybe, although I don’t ever remember seeing it as something that can be withdrawn.