Disney Plus subscriptions are now over 50 million

I find it incredible how my family has spent most waking hours with Disney+ on a screen somewhere, but crickets for Apple+ yet subscribe to both).

Apple TV powers Disney+ for us.

If I were Tim Cook I’d be buying Disney immediately at these prices.

That’s impressive growth. Direct to consumer business segment might turn profit by year end. They hadn’t predicted that till 2024. Bit of welcome relief given their other businesses are on ice

Great content for users but not a great balance sheet. They got greedy with buying Fox when the markets were drunk and Bob Iger is no longer steering the ship - smart move, leaving on a high, preserving his legacy.

Apple has a stellar credit quality, is net cash and would probably rather buy the producers and content creators who are jumping the HBO (and maybe Disney) ships in future, if there is a strategy shakeup under the new CEO at

like there was at HBO. The Cupertino-based house absorbing all the debt to buy content is unlikely. If there is a forced asset sale at Disney in future in order to get leaner, Apple can pick up some nice pieces - they are sitting on plenty of cash.

Well worth a read: 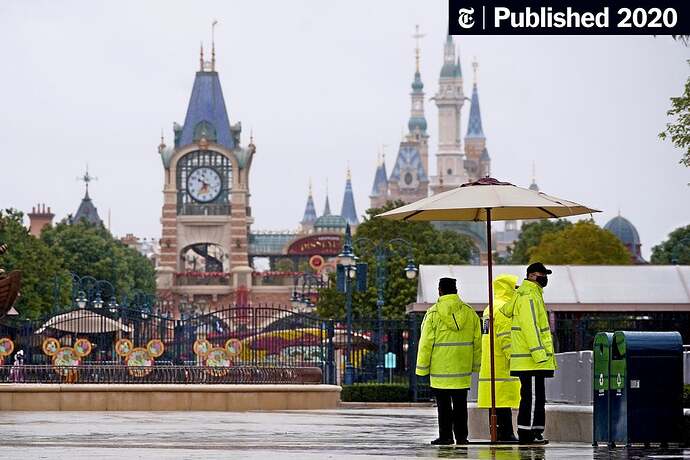 The former C.E.O. thought he was riding into the sunset. Now he’s reasserting control and reimagining Disney as a company with fewer employees and more thermometers.

Kind of like what The Mad Hedge Fund guy said in his free webcast (@101):

Why would Apple want to buy theme parks and cruises?

Great content for users but not a great balance sheet.

I was wrong about this:

Bob Iger is no longer steering the ship - smart move, leaving on a high, preserving his legacy.

Guessing he cares deeply about the company, back in the saddle.

The next day, March 13, was their last in the office. In early April, Mr. Chapek sent a bleak internal email announcing a wave of furloughs. He pushed immediate cuts and freezes on everything from development budgets to contractors’ pay.

The company employed 223,000 as of last summer, and won’t say how many workers are furloughed, but the numbers are huge. It includes more than 30,000 workers in the California resort business alone, according to the president of Workers United Local 50 that represents some of those workers, Chris Duarte. Another 43,000 workers in Florida will be furloughed, the company confirmed on Sunday. All the workers will keep their benefits, but their last paychecks come April 19.

The mood at Disney is “dire,” said a person who has done projects with the company. “They’re covering the mirrors and ripping clothes.”

The former C.E.O. thought he was riding into the sunset. Now he’s reasserting control and reimagining Disney as a company with fewer employees and more thermometers.

Walt Disney will stop paying more than 100,000 employees this week, nearly half of its workforce, as the world’s biggest entertainment company tries to weather the coronavirus lockdown.

Suspending pay for thousands of so-called cast members will save Disney up to $500m a month across its theme parks and hotels, which have been shut in Europe and the US for almost five weeks.

But slashing fixed costs in a more severe way than other theme-park owners such as NBCUniversal and Warner Media has raised significant reputational risks for the century-old empire behind Mickey Mouse.

Can’t be far away from killing the dividend for a while. It seems bad capital allocation to be taking on debt whilst supporting dividend payments but it seems to become a ego thing that they must maintain it above all else.

Feel a little for Disney, Corona gonna damage the parks for months and months.
Even when we are out of it, I reckon there will be quite a few nervous travellers who may give a Disney holiday a miss for a while!

It’s going to make their film studios (and Disney+) much more important for revenue.

Not sure about Disney cruises either…

What do we reckon of DIS post vaccine news. I’m looking to add a few more ‘back to normal’ stocks in, and I’m not averse to picking something up that has already partially recovered. What do we think, is there more upward potential?

I think all of it’s streaming services will merge to just Disney+. I think this has to be the most exciting part of it’s business for us investors as it has huge potential to give a growth spurt to a steady Eddie stock.

It’s definitely of interest having that hybrid of stay at home and return to normal, it’s just a question of whether a better day to buy will come or is it going to pop

That article is funny. Disney+ is just 7% of their business. 1 year old and it already accounts for 7% sounds like exceptional growth. Not to discount the rest of the article I just thought that quick to dismiss line was pretty funny.

This is another OK read for a bit of critique, but ends up on a positive note

The virus has surely helped Disney+ growth, I’m sure loads of parents saw it as an easy lockdown entertainment and I don’t like their chances in any negotiations around unsubscribing, I expect it to be very sticky.

Obviously the rest of Disney’s business has been really badly hurt, but I imagine lots of that will be recovered eventually. I think there will be plenty of people, relatively unaffected financially, whose first action after getting a vaccine will be to book a trip to Disney. For many people 2020’s lack of holiday spending won’t become savings, it’ll become longer/more expensive/multiple trips in 2021,2022 and the mouse will be ready.

I doubled down on Disney in July and I may get some more if we get another sale.

They haven’t stopped either, I just got a new sharing feature the other week allowing you to watch movies with friends remotely. They’ve added features that people have been asking Netflix for for years.

The service is frankly really good value for money compared to the competition. I’m not surprised it’s doing so well

They are in desperate need of new content though!

Yes, I do wonder what they plan to do. Though honestly it’s given them a platform to expand the universes of their IP (to great effect with the mandalorian). I imagine they’ll do the same with other franchises. Big question might be if they’ll stick with Disney stuff or license other material. I expect they may go the route of Apple and make brand new content to fill that gap