Which privately held company do you hope will do an IPO in the near future?

Other than Aston Martin, which is rumoured. I’d love to see LEGO. Not just because I think it would be a valuable one to hold, I just like the idea of having a share in LEGO. Much like Aston Martin for me.

Uber for me. Plenty of issues now, but what a potential when AI cars will be around, all the overheads on drivers’ wages will be turned to $0. Whether it is in 10 or 20 years - hard to say. But if they IPO in the next 5 years, I will be looking at making it at least 3-10% of my portfolio for sure.

Uber is definitely one I’m watching. I’m expecting it to develop into more than just a taxi and food delivery service though. I think they could be a massive disruption to companies like Parcel Force and co if they get the AI section working. You could essentially have a mobile Amazon locker.

Prevailing perception seems to be the only long-term competitive advantage and business for ridesharing companies is who can solve autonomous cars first.

Otherwise the model supposedly just measures who has the biggest investor cash pile to burn.

The tech and distribution barriers to entry for ride-sharing are very low, so if e.g. Google get their first on autonomous vehicles, it might be much easier and more valuable to just build ‘Google Ride’ than to sell the cars to Uber.

Not sure where Uber are in the race for autonomous vehicles basically.

Lego would be fun, but Alipay is the one I want to buy.

They are well in that race, 24,000 vehicles looks like a serious decision.

Which privately held company do you hope will do an IPO in the near future?

I wouldn’t buy Uber. The corporate culture is (or certainly was) toxic. The network effects are only regional - they’ve given up on or sold up in several non-US markets. Currently the value is in having the largest two-sided marketplace (drivers and ride-purchasers) in a territory. Longer term, one side of that two-sided marketplace disappears when/if cars go self-driving and with it goes some of the defensibility unless they’re ready to buy a massive fleet and either market-leading in autonomy or ready to buy that in too. And in self-driving capability imho they are considerably behind Google, which owns a piece of Lyft.

I doubt you will ever see them IPO. Musk has done it with Tesla and he is not happy. People do not make same mistake twice

The best bet is buy Alphabet as they hold 10% of SpaceX.

I thought it was at least partly the autonomous vehicle’s fault. Driver partly to blame for not watching and there was very little time to react, but the vehicle failed to brake

I’d probably buy SpaceX if I could, Despite the fact I’m not impressed with Tesla (as an potential Investment)

Does Freetrade count? If so, Freetrade.

Yep my dream IPO is FreeTrade

How long after Freetrade IPO’s at a £10bn valuation am I allowed to sell my shares and retire?

The best bet is buy Alphabet as they hold 10% of SpaceX.

Google has billions in startup investments.

Ooops, you are spot on, I got it wrong. Google owns 7.5% but together with Fidelity the own just under 10% 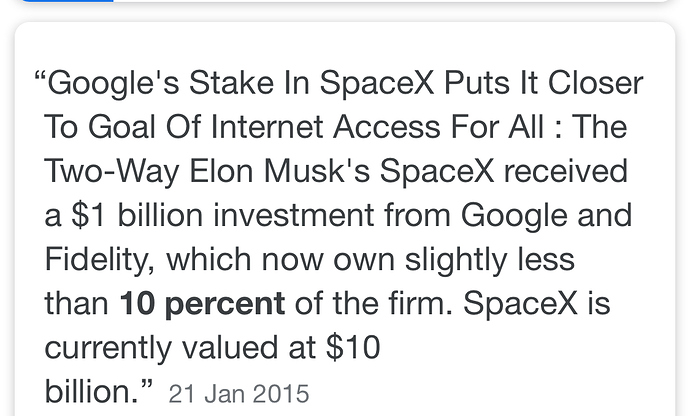 This was on the cards a while back, but it’s all gone a bit quiet of late.

@VikPaw still on the cards