Afternoon people, I would like to start a topic about which ones to get into as I’d like to diversify my portfolio, Trig, Greencoat etc.

I’m in Trig, and have other “renewable” focussed stocks and trusts on my watchlists.

Also as far as renewable goes, you may want to delve a little deeper into certain stocks. BP (not a stock I own) spent over a billion on Chargemaster, the biggest EV charging company in the UK.

Also Legal & General, which I do own, have a percentage of their own portfolio invested in renewable infrastructure.

So even though there is renewable “specific” stocks, there’s also bigger players diversifying into this field.

Another thing to look at is what materials are going to be most at use in a renewable focussed world. Paper, Copper, Lithium to name a few

This is just my tuppence worth, do your own research etc lol

I Also have legal and General, RDSB, could be worth looking into Rio tinto? think they are going into lithium mining in a few years.

Technically, Tesla is a renewable energy business stock, after acquiring its sister firm SolarCity. But mostly its just cars. And if you buy Tesla, you are investing in Elon. The Wall St shorts and trigger happy (algo) traders will also take you for a ride, so it’s probably a long-term play.

Exclusive: Tesla's solar factory is exporting most of its cells - document

The "great majority" of solar cells being produced at Tesla Inc's...

They now cost up to 16 percent less than the national average.

So even though there is renewable “specific” stocks, there’s also bigger players diversifying into this field.

Which is, as I understand it, the biggest risk in investing in TRIG. If a big player comes along and decides to make a serious attempt at the sector, they could overtake TRIG like snaps fingers

That said, the ‘renewables’ section of my own portfolio is mostly made up of TRIG at the moment (as Jon Richardson might say, “That would be a low worry”. At the moment, anyway)

Tesla terrifies me, as an investment. Elon Musk is a huge liability, and their car business is almost on a knife-edge, IMO - if one or more of the big car manufacturers were to decide to ramp up or even go all-in on electric, that’s Tesla’s car line done for as a mass-market concern.

The batteries are perhaps the most promising aspect of their business - they could leverage themselves into a position where even if they aren’t making the cars they provide the batteries, and of course batteries being batteries, they would have a lot more potential uses than just cars.

However, even if that were the case, my own personal opinion is that Tesla would not a good investment make. I feel they’re overpriced because so many are anticipating future profit, so said potential future profit has already been built-in to the current price. And I’m not convinced they’ll get there.

This was one of the more recently added ETFs, as I recall. I looked at it and decided I needed to do more research. Many of my questions relate to comparing it to TRIG - because I’m already invested in that. What does this offer that TRIG doesn’t? Would I be overexposed if I invested in this as well as TRIG and the whole sector went down? It’s tricky.

Tesla terrifies me, as an investment. Elon Musk is a huge liability, and their car business is almost on a knife-edge, IMO - if one or more of the big car manufacturers were to decide to ramp up or even go all-in on electric, that’s Tesla’s car line done for as a mass-market concern.

Elon and Tesla gave the patents away. The big picture is helping people switch to EVs.

Elon Musk has always been a rebel. Now he's an open source rebel.

Their product is different enough for now and so far major car corporations are just waking up. Once they ramp up the production of anything that’s as good as Model 3 from the outside, Tesla better be ready to meet production numbers that are much higher. VWs are still slow though and their EV cars look the same.

BMW won’t be making i3 any more, yet I see loads of rich people driving them.

As for Elon being a liability-Tesla wouldn’t have existed without his investments and last year they would’ve gone bankrupt without him. Setting up an extra Model 3 production zone on a car park saved the company. The entire business model (Roadster > new expensive hatchback Model S > new type of Model X SUV > affordable Model 3) is his idea. Model 3 wouldn’t have existed without S and X.

The iShares Clean Energy exchange-traded fund has risen by 32 per cent so far this year, streaking far ahead of the oil-dominated Vanguard Energy ETF, which has risen by only 1 per cent.

In August, the renewables fund bettered the fossil fuel ETF by the biggest margin in five years.

Renewable stocks also outperformed oil and gas shares in 2017 and 2018, although both sectors ended last year down.

So far this year, the largest renewable energy ETF in the US, Invesco Solar, has risen 58 per cent. 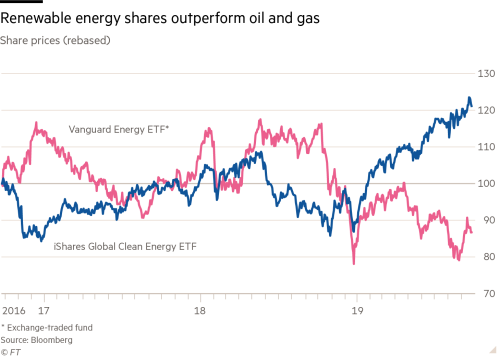 The strong performance of the renewables sector marks a turnround from the years immediately after the financial crisis, when investor bets on green energy quickly soured. Shares in the iShares Clean Energy ETF fell 80 per cent between 2008 and 2013

Hey all! There are a number on Freetrade that I have small holdings in: TRIG, UKW, NESF, INRG and BSIF. I also have a small holding in IEM which invest in a number of renewables I believe. Most of them have a solid yield and solid but not spectacular increase in their share price. I’m looking forward to some AIM stocks being added in this area to look for some real growth opportunities!

My concern is that this outperformance happens despite relatively stable and affordable oil prices. On the back of climate change, real trend or bubble?

For reference, Solar Photovoltaic modules price is behaving as expected and it can only become even cheaper over time:

Couple this with the ever increasing energy consumption and the potential benefits of renewable energy if it manages to catch-up and you’ve got a good recipe there:

Tesla doesn’t sound good to me, thanks for all your reply’s , I have put abit in greencoat, and might go for BP also.

Bumping this up. What are people thoughts in light of Covid. Are we going to"building back better"?

The UK really needs to look into Tidal Lagoons, read an article recently about a project at Swansea, which kept getting pushed back. http://www.tidallagoonpower.com/

There was some news yesterday on this https://renews.biz/60676/cop26-president-says-uk-will-emerge-with-a-green-recovery/

Renewable energy stocks are the future. I'd buy these FTSE 250 shares - The...

Renewable energy stocks have outperformed the market over the past few years. This Fool analyses two FTSE 250 shares to capitalise on the trend.

I don’t know if Motley Fool links are worth sharing? Their articles are usually clickbait that just promote joining their site/signing up to their mailing list.

Does anyone with more experience than me know if they are a reputable source for anything?

I’m all for renewable energy and would ideally hold around 15% in my investments. But I have developed a nagging worry about the take off of the sector and that’s that the big boys who have been making billions out of power supply for decades are watching and waiting. They have the power cash and ability to step in and replicate success rapidly. Its easy in this age to think of the likes of Shell and BP etc as lumbering dinosaurs but you know in reality they are sharp ruthless and determined.
I feel the same way about fintech vs the banking giants, I’m not sure what to do about it because I’m following my heart at the moment and baking the upstarts.

Total just bought a massive share of SSE renewables, so they are waiting for the right moments

Germany’s 130 billion euro ($145 billion) recovery budget puts the focus on climate-friendly industries and technologies, underscoring Chancellor Angela Merkel’s pledge to reboot the economy and wean it off fossil power and cars that laid the foundation of the country’s export prowess.

Link to to the Total investment in SSE below:

SSE PLC on Wednesday said SSE Renewables has entered into an agreement to sell a 51% stake in its Seagreen 1 offshore wind farm project to Total SA for GBP70 million.

(Alliance News) - SSE PLC on Wednesday said SSE Renewables has entered into an agreement to sell ...