Free shares? Don’t mind if we do. 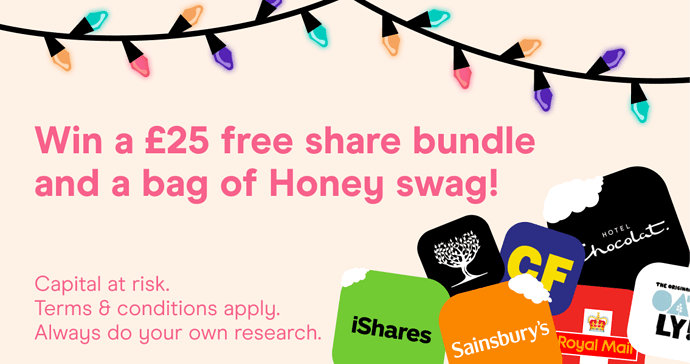 Reading this on your phone? You can now click on any stock mentioned in the newsletter and you’ll be taken directly to the stock page on your Freetrade app!

(Remember, these links aren’t invitations to buy or sell any of these stocks, they’re just a new speedy way to check them out 👀)

Bud’s gone from flat to fizz this week.

After FIFA’s last-minute beer ban, many were under the impression the World Cup’s main sponsor was on the cusp of a big financial blow. In reality, Budweiser is laughing all the way to the bank.

It’s not what the King of Beers’ marketing department had in mind, but Budweiser’s Qatar cancellation is having a massive afterglow effect. Just take a look at this week’s Google Search trends for ‘Budweiser’. 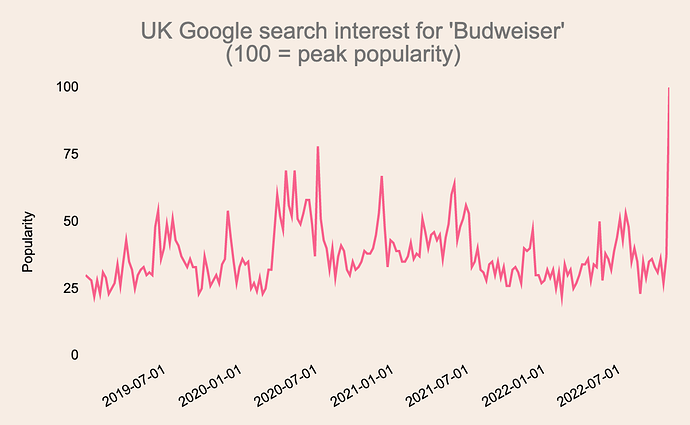 Almost overnight, Budweiser went from villain to victim. While at first, it was under fire for supporting the highly contentious tournament, it’s become pitied for what looked to be a very costly U-turn from the tournament’s organisers.

And Bud has been quick to play the martyr, going to Twitter with claims that its now unsellable, pent-up beer will be gifted to the winning team. 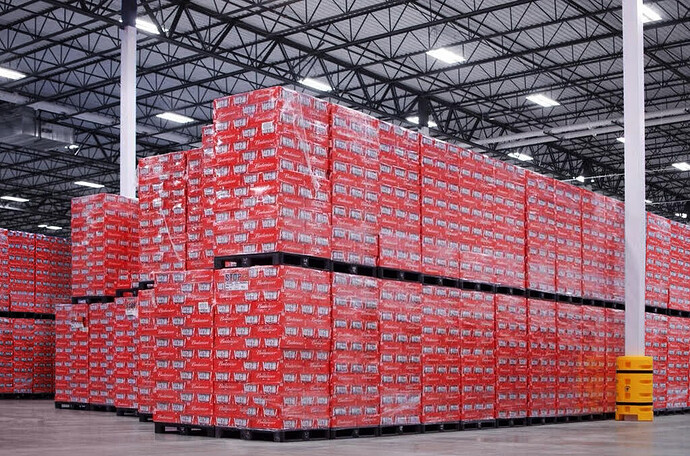 Shipping all of this is going to get Messi.

That sea of red might sound the “lost profit” alarm bells to some, but Anheuser-Busch (Budweiser’s owner) actually saw investors flock to its stock following the news.

A lot of the media fanfare surrounding this story has focused on whether Budweiser will get some sort of a refund on the £63m deal with FIFA. With the answer to that still hanging in the balance, it might seem surprising the firm’s generating so much investor interest.

Realistically, whether Qatar gives Bud some cash back is irrelevant.

The tournament’s on-site sales are a very small component of this sponsorship deal (as much as some visiting British fans would like to convince you otherwise).

Qatar’s World Cup venues can accommodate up to 40,000 guests. While that could ultimately be a lot of beer sales lost, Budweiser’s sponsorship goes much further than those arena walls.

When Bud sponsored the 2018 tournament, global revenues grew by 10%. Host-nation Russia was of course a part of that, but Budweiser actually had 50 countries to thank for its rise in sales. Columbia and Anguilla were two of those with substantial at-home sales growth thanks to the tournament putting the beer on the map.

And aside from multi-million dollar contracts for billboards, TV ads and website sticky banners, social media virality goes a long way too. Budweiser may have just snagged itself a pretty great sponsorship after all.

Foot Locker’s stock was strutting its stuff this week as the sneaker seller reported a surprisingly good Q3.

While analysts were anticipating a 6% decline in the retailer’s same-store sales, Foot Locker managed to grow those revenues by 0.8% instead.

This is about a whole lot more than the popularity of Air Force Ones, though. It’s a window into what the market might expect from other US retailers reporting this week. And given the US is by far Foot Locker’s biggest market, better-than-expected results could be a beacon of hope for a less-bleak-than-feared Christmas.

It looks like Americans weren’t as badly affected by rising interest rates as many predictions had warned. Or at least, not so much so that they’ve cut back on their footwear.

And Foot Locker certainly has that on its side, since shoes have the most resilient demand out of all apparel items during periods of economic downturn.

Looking forward, management says Christmas sales will be better too. Foot Locker cut back on what it previously feared would be a sales tumble of 8-9%, to a lighter fall of 4-5% instead. 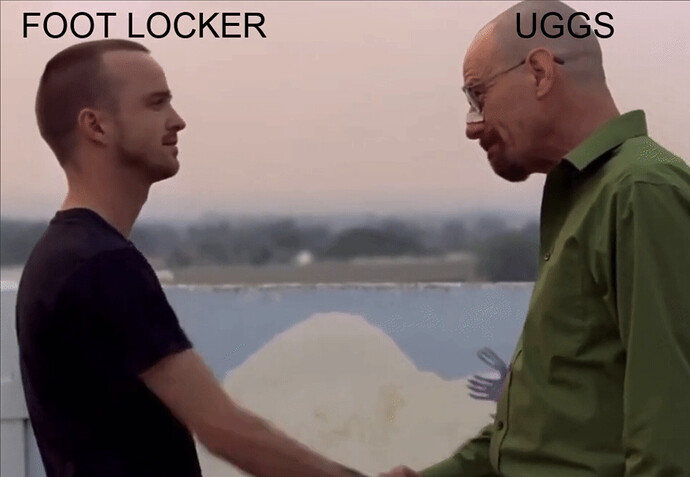 Sometimes, you have to shake hands with the devil.

One big reason for the optimism? Uggs. Say what you will about the furry moonboots - Foot Locker CEO Mary Dillon dubbed them a ‘comfort icon’ and ‘key brand’ for their Winter sales success.

That’s… not so fetch.

During a period where plenty of luxury retailers witnessed a sales boom, Farfetch, the online luxury marketplace, saw a lot more doom and gloom.

The UK-based website sells all the big names at what are often the same prices they’d go for in their respective stores. Its main distinguishing feature is that it’s a hub for all those designers.

In theory, that should have worked in its favour this year, especially in the UK. Our Swiss watch imports were up by 31% for the first half of 2022. And last month, an 81 year-old bottle of whisky hit a record-smashing high of £300,000 at a Sotheby’s auction.

Well, unlike the Pradas and Chanels of the world, Farfetch still has a way to go before it’s a household name. Those fashion houses emerged in 1913 and 1910, but Farfetch launched in 2007.

So, the firm is trying to make up for that time by spending money to establish itself as a  reliable equivalent to a luxury brand’s own store.

Honey readers, please settle a team debate and tell us what movie these self-lacing kicks are from.

That all seemed fine and dandy for a while, but in its latest earnings report, Farfetch revealed advertising costs were taking big bites out of its margins. They fell from -3% to -5% this quarter.

Given it’s online-only, the company needs to acquire more and more digital real estate to try and keep up with the in-person brand awareness its competitors can develop too. And according to Warc Media, those digital advertising costs are up by 31.2% on pre-pandemic levels.

This puts Farfetch in a particular predicament. Because luxury products are very much in, it’s just that using Farfetch… isn’t.

For most luxury brands, a long history lends a helping hand. Without much time on its side, and now with less money too, Farfetch will likely find that an increasingly tough task.

Especially as it warns of growing inventories. While most retailers shed stores by lowering prices, the last thing Farfetch needs is a damaged reputation.

And now the Budweiser frogs are stuck in my head