Hi there, can someone help me understand why my total costs on two consecutive windows in the app are different. The first screenshot is before I placed the trade and the next one is after. It is not clear why when I buy £145 worth of KO, the total purchase is then worth £131 (also total shares is less than 4.0055). 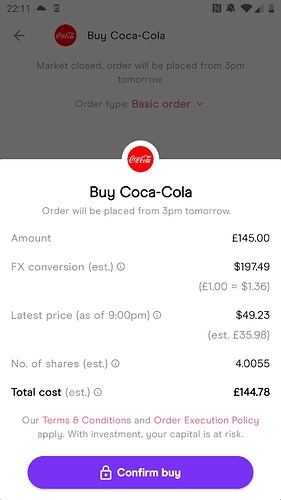 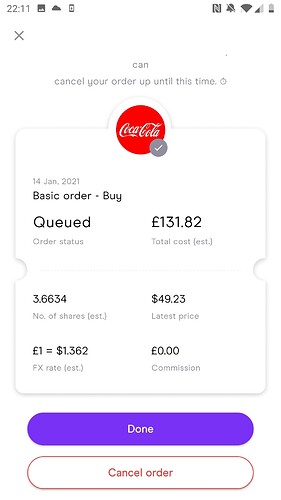 Not 100% sure, but i believe it is because some of the money is kept aside to ensure the order can execute despite any currency Fx fluctuations. You should notice that the ‘missing’ £10~ isn’t in your available funds its in your reserved funds.

From the screenshots I can see that the trade has not executed yet so both screenshots are estimates but the two estimates are significantly different.
They are less than a minute apart so I doubt the currency conversion fluctuated around 10% between the two.

The image on the right appears to have been placed when the market was closed so I’d guess some leeway is built in, as both the price and fx rate will move before execution.

The second image is what’s placed to order tomorrow at 3. The first image is before confirming that buy.

Pretty sure it’s an fx buffer

While we are at it, can someone quickly explain me uk stocks stamp duty? It seems to be saying 0.00 on my purchases. Is this something I need to pay if i invest a certain sum?

which stocks in particular are saying 0?
There is no sd on AIM shares.

How do I know if something is AIM?
TWD and IKA said 0 if i recall correctly.

They are both AIM Listed if I am not mistaken

Hmm almost 10% FX buffer is quite brutal. What happens then with this buffer is the next question - is it used to purchase additional shares to bring them close to the expected amount or is it refunded to the balance. The obvious problem is that the first screenshot is very misleading. If I want to hold X full shares, its hard to tell how much I should put in to guarantee that. Can PO/support from FT confirm please?

No broker can guarantee your purchase price when the market is closed and the fx rate will move for 17 hours or so until it opens.

I’d imagine it’ll be one of two scenarios as you suggest though:

Let us know what happens at 3pm

I cancelled the order when I noticed the difference. I’d like to understand what I’m doing with my investments beforehand. I know it’s not a huge amount just a matter or principle.

Totally understand you cancelling. I find the not knowing the price/quantity even on live trades disconcerting, despite being aware FT are bound by best execution rules.

Too used to other platforms I guess.

I did notice this isn’t described in their execution policy, which feels like an oversight. Maybe someone at freetrade could clarify @sampoullain ?

one of two scenarios

It’s a bit of both. At the time of execution Freetrade will buy as many shares as possible up to and not exceeding the value that you entered (£145 in this case), including any stamp duty and FX fees. Then the difference between the amount actually spent and your initial target is returned to your balance.

It may seem unsettling at first but this is how it works pretty much everywhere.

If you want to limit amount of money you spend on the purchase you should be using limit orders (plus feature).

This topic was automatically closed 416 days after the last reply. New replies are no longer allowed.