I was wondering if there are any detailed screenshots available of the app in use, since it is now in live testing. Apologies if I’ve missed these, or the points below have already been raised elsewhere.

I’m particularly interested in how the portfolio will look. I was looking at the web interface of one of my dealing accounts today and found it wasn’t really useful or do what I wanted. It showed a stock ticker, buy price, value, and total gain / loss. However, to get further info such as a chart, daily change etc. it was 2 or more clicks away which is cumbersome and slow in a browser. I can’t imagine how this would translate to an app in any quicker format.

There are various methods, so I was just hoping to see what we can expect and perhaps put in some early feedback.

Ultimately, what we expect to see is going to differ based on strategy and intent, so making it easy to switch will be crucial.

When it comes to charts, again, the ability to easily switch the timeframe being viewed and also to tap the line and see a specific time + value would be great. Similar to how the XE Currency app charts work. Two fingers on the chart to show the difference between points - that would be awesome!

I’m assuming eventually US and UK will live in the same list, though being able to look at them individually might be useful just to see total invested in $, compared to £.

The stock list is good I’m assuming it’s showing portfolio gains, now if that could be switched to daily gain as well that would be great.

I’m loving those logos, now I’m thinking we need an option for a compact view with text only.
Thinking about the UX. When I’m using the stocks widget on iPhone, i want as many lines in there as possible as having to click through to the app to check more is tedious, as well has too much scrolling.

Thanks for providing these screenshots @Cgwinning, just thought I’d add a shot of the portfolio view for @VikPaw. This is roughly how it will look for launch 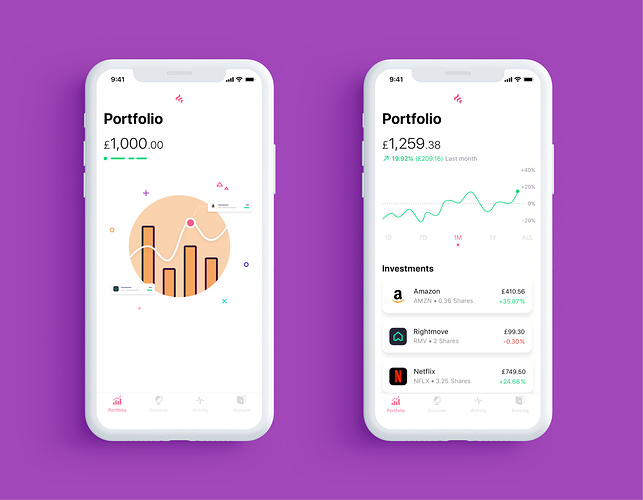 Thanks for sharing this

just a quick question - does the timeframe selector (1D, 7D, 1M etc.) for the chart also control the timeframe for the percentages that’re displayed for each stock? So if I wanted to see the % change for each of the stocks in my portfolio in the past day, could I just select 1D from the picker & scroll through the list?

Also, it’d be great if you could talk through the design of this tab & the rationale for some of the decisions you’ve made at some point. I’m guessing that understanding this tab in particular would help give us all a sense of your priorities when it comes to design choices & they’re obviously going to be closely linked to Freetrade’s philosophy & values..

If you tap on Amazon does it alter the graph or take you into more detail on Amazon. I was hoping tap changes the % to a value gain. Using a swipe to allow more options and maybe Full swipe to enter more details. Sorry not trying to be prescriptive here, just thinking out loud.

Agree with @anon2636484 about wanting the % to change if the timeframe is changed, though usually it’s a fixed daily figure - but since we’re bleeding edge here we can change the norm

It’s an interesting idea to update the individual investments as per the timeframe, however right now you’d drill down into the details view of each investment to see this level of detail (this this answers your question too @VikPaw).

Interesting! So what is the % for each stock based on at the moment?

Interesting! So what is the % for each stock based on at the moment?

It’s investment gain/loss since you bought it, so technically “all-time” of your investment.

Great so keeping the focus on the long term performance of our investments, rather than daily price fluctuations, I like it

How does this manifest if you don’t make a lump sum investment but invest in a security over time (which I imagine most will do)?

As it is with the majority of other brokers and as it works with HMRC when calculating CGT, you will probably have weighted average. If 2 shares gave you 12% growth and you bought one more, 8% growth is displayed.

Adding shares is fine, because usually you are shown your average purchase cost, Total Spent / Number of Shares.
The issue I have is how it is represented when you want to do a partial profit take, because usually I would want to see the initial cost stay the same. What I’ve seen is that the Total Spent figure is reduced by the income generated from sale, and this can falsely inflate the apparent gain.

- still finding my feet here, so do merge / move this if it’s in the wrong place or already been discussed.

I’m having a think about my investment strategy and was wondering if there are any videos/presentations of the (likely) Freetrade user interface/user experience out there? A picture paints a thousand words and all that!

My initial thought is that I might want to have a small number of different investment strategies (some investment for dividend income, some market tracking ETFs and maybe a few shorter term individual stocks to gamble (in an informed way!) on bigger returns). It struck me that something like Monzo pots* would be a good model here to allow me to segregate them into nice buckets, but then I realised I know next to nothing about the UI.

Can anyone point me in the right direction?

*I’d also like to see each of these portfolios in Monzo as pots, but that’s another story!

Hey, you’re not the first person to ask this so I’ve moved your post to this topic, where some screenshots have been shared already, I hope that’s ok!

My initial thought is that I might want to have a small number of different investment strategies (some investment for dividend income, some market tracking ETFs and maybe a few shorter term individual stocks to gamble (in an informed way!) on bigger returns). It struck me that something like Monzo pots* would be a good model here to allow me to segregate them into nice buckets, but then I realised I know next to nothing about the UI.

At the moment, the app has a single view of all of your stocks & ETFs in a single portolio. But I can definitely see the appeal of bundling groups of them together separately, that’s a cool idea

Could you please post that idea as a dedicated topic? That’ll make it easier for others to find the idea & discuss it

*I’d also like to see each of these portfolios in Monzo as pots, but that’s another story!

You’re not the only one

Along with portfolio graph it would great if there is a chosen index(or more), ftse, snp etc.

By the way a seperate little graph in the bottom for the dividend income would be great.

Are you looking for a way to add a benchmark to compare your portfolio’s performance against there?

If so, we’re planning to add this

I think you’ll love what we’re cooking up @kenny You’ll be able to see your time-weighted and money-weighted historical returns. Totally agree most platforms are geared to short-termism (prob to get you to trade more). First up is to make sure everyone has a market benchmark they can compare their portfolio returns to.

I use WeBull app to track my performance and it has the following way of showing your holdings against your chosen benchmark: 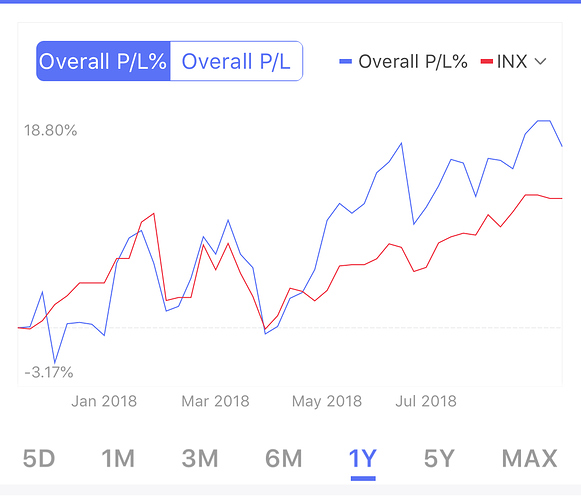 This particular app shows your performance with the blue line and your benchmark with the red.

Because all my stocks are within S&P500 with no exceptions, I chose it to be mine, but there are plenty other options too, including various FTSEs.

Maybe something we could have with Freetrade. Not initially of course, but as part of gradual app improvement