Just done the questionnaire thinking it may be a bit interesting but it is just the question of the price. Very strange it is not a bit more complex and seemed really desperate. TBH the mail made me consider cancelling my R8 commitment.

Mixed in with some of the negative comments on the CC forum there was a Q about why FT didn’t have a grown-up discussion on why the round is so dramatically lower in price. Actually explain what may have been done wrong and what they were doing going forward etc to improve. I thought that was really good point and would give me more confidence to consider investing more.

I really don’t see why they need to justify the lower price, take a look what’s going on in the world.

Public market traded companies such as HL are 50% down from their highs, VC aren’t handing out money at crazy high valuations. Freetrade have offered everyone the same deal as the VC’s got, a person investing £10 is effectively getting the same deal as people investing millions, seems more than fair to me!

You may not see why but the enthusiasm is low this round, and they are asking what people think so people are saying why. Of course, people would like to know a bit more about why the price has gone how it has when not all competitors have gone the same.

FT keep saying we raised record numbers, our KPIs beat our competitors and many other positive things and kinda ignore the negative. Personally, I have invested again but that is something I feel and know others do as well.

It is clear as day lots feel the trajectory is not good and that information is poor, rightly or wrongly, they can ignore peoples fears but not be surprised when they do not get more investors.

Saying that I like this round but would have more respect for a company that acknowledged a bad raise. Of course, they do not need to or are expected to do that.

r.e. re-pricing. I didn’t take that interpretation. I just assumed the board/exec management wanted a better understanding of where the recipients of the survey are so that can figure out whether they will hit their goals or not.

To me it is “obvious” what the issues are. However, I think it is very good that the CEO wants some data.

What competitors are you referring to?

Big-g I think it is terrific that you are asking questions. You should ask questions. No matter what the investment. And even more so for crowd funded investments after all as the strap line goes Investing in startups carries significant risk.

One potential danger that people have (including me!) is to fall in love with an investment. We should always stand back and ask what makes sense now. Previous investment(s) in any share(s) are a sunk cost.

I don’t think that the issue is as a previous respondent says getting the same deal. Honestly totally irrelevant. The CNL deal was struck at the end of last year (or perhaps at the beginning of the year). You and I have no idea what deal would be struck today. Earlier this year I heard time and time again people say words that say or imply ‘it will be better by September’. Well it ain’t so. The market climate is worse and as we can we see the economic indicators aren’t getting better.

Now people can make their own judgements about the general market, the specific broker market and finally Freetrade’s own performance.

On the positive side, you could take the view that high risk implies high reward.

I have (only in my opinion) a rather good view of what happens in the community and what people say. I know the the fan boy and fan girl type comments and the comments that imply someone has been drinking a great of Kool-aid. I also see the comments that are 180 degrees different.

My own opinion about whether this is an investable company or not is not relevant to you. It is improbable that my appetite for risk is the same as yours. I get it that you are ‘big’ but maybe I eat bigger steaks than you do. You have no idea :-). I wrote a comment today Funds, Trusts, and other things Baillie Gifford - #19 by bitflip about information. Implicit in that comment is that we don’t have and don’t get all the information that ‘big investors’ perhaps get. This is where the rubber hits the road we need to make the call by ourselves.

Well for starters the company you mentioned may be down 50% but FT is quite a lot more than that down on the last round. I don’t want to get into the negative too much but the point I was simply making is that FT are asking what people would like to invest more and many feel they need more information to give them confidence in the general direction of the company.

Some of those people think that includes a bit more about why the decline is so severe and what the plans to deal with the whole situation is. Again, rightly or wrongly, like it or not X amount of people will hold off due to this.

This is where the rubber hits the road we need to make the call by ourselves.

Not here to be argumentative but the new VC investment was agreed in May, Freetrade have shared that Series C was agreed at a higher valuation than the last crowdfund but markets went south.

They pulled the term sheet in December. You have no idea when the next steps were agreed in principle. The lawyers did their thing afterwards.

So are you implying the negotiations went from an up round to the current CLN before the end of 2021? 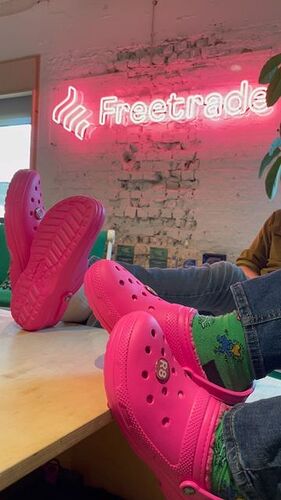 Thank you ever so much for explaining this! I wouldn’t have decided to invest at all unless I could have the key terms laid out simply so I have a full grasp of the possible outcomes.

Invested approx 10x what I’ve previously invested on two occasions, 3-4 years ago. Preferred shares are a selling point, as well as the upside/downside protection.

Hope it helped others make their decision too.

I ended up putting a very small amount into the raise. Unless they start to actually ship products I cant see myself doing it again.

CTL, CPH2 and MC Mining have now all been added to your app!