It’s fair to say most of the tax cuts being proposed, that we might find out about in the chancellors update tomorrow.

Are essentially benefitting the wealthier/high earning, by having the biggest tax reduction impact, same as this stamp duty cut - https://www.google.com/amp/s/amp.theguardian.com/money/2022/sep/21/uk-stamp-duty-cut-will-benefit-wealthier-and-raise-inflation-say-experts

Obviously some form of tax cut is what you’d expect with the Tories forming the Government.

Any benefit to first time buyers will probably get eaten up by some increase (however small) in house prices.

There seems to be a fair bit of a noise about Stamp duty cuts. We shall see on Friday I guess.

I think if the stamp duty cuts happen we will see lots of heavy hitters buying big lump sums of stocks while they can?

I think they were talking about stamp duty on property sales not shares. 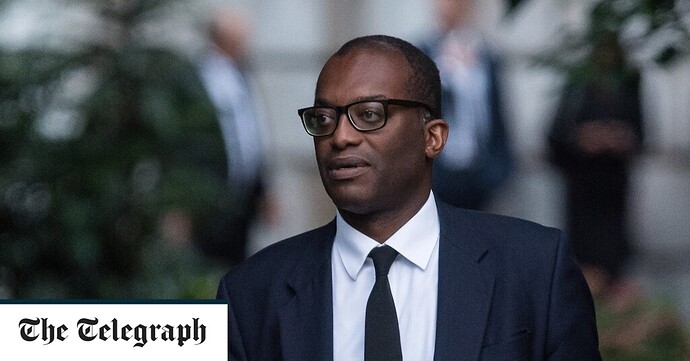 Dividend tax cut to save investors £345 a year

There is going to be a lot to pick over from today’s announcements. Very interested to see the reaction play out over the next few days. Also I know they have been calling it a mini-budget but it sure seemed hugely significant.

I think this is amongst the most appalling legislative changes I’ve ever seen in this country and am now exchanging substantial amounts of my savings into dollars.

Yes. I was thinking the same thing. FTSE has been sinking since the first announcement yesterday and the retail Wise rate is 1.10560. Blimey!

All the European indexes are down a similar amount today and the US Premarket looks poor also. Just holding my nose and continuing to dollar cost average into my ETFs.

Also I believe is it Lightyear allows users to hold funds and invest in US Dollars?

European indexes are down

Good point. But on the market, the point is that LSE stocks weren’t swayed by the UK ‘budget’. It gives you an indication of how much of a gamble the ‘budget’ is. I can assure you the markets don’t hang around digesting these things.

The significant thing at the moment, and majorly so, is the strengthening dollar (which is the real point of what @dk1 and I am saying).

I see I actully did think that after seeing articals and didn’t know if it was shares included, thanks for letting me know.

By sheer human instinct, lets say US inflation steadily drops over 2 years and the UK’s inflation rate (& western Europe’s) actually stays persistently high due to wage pressures going up. That makes for a challenging 5-10 year period. The US average/above average person will typically be okay, though UK & western Europe could have a tough time absorbing persistent inflation and currency depreciation.

Inverse the s&p and join the dark side.

Also yeah, diversify. I like a house but precious metals from her late majesty isn’t taxed and doesn’t have an upkeep cost and you can stash it.

Maybe I’m thinking like I’m from China and want out but isn’t that the point in storing wealth?

Foreign portfolio currency exchange unhedged going up because of tanking GBP. Not the kind of growth I want. But hey… 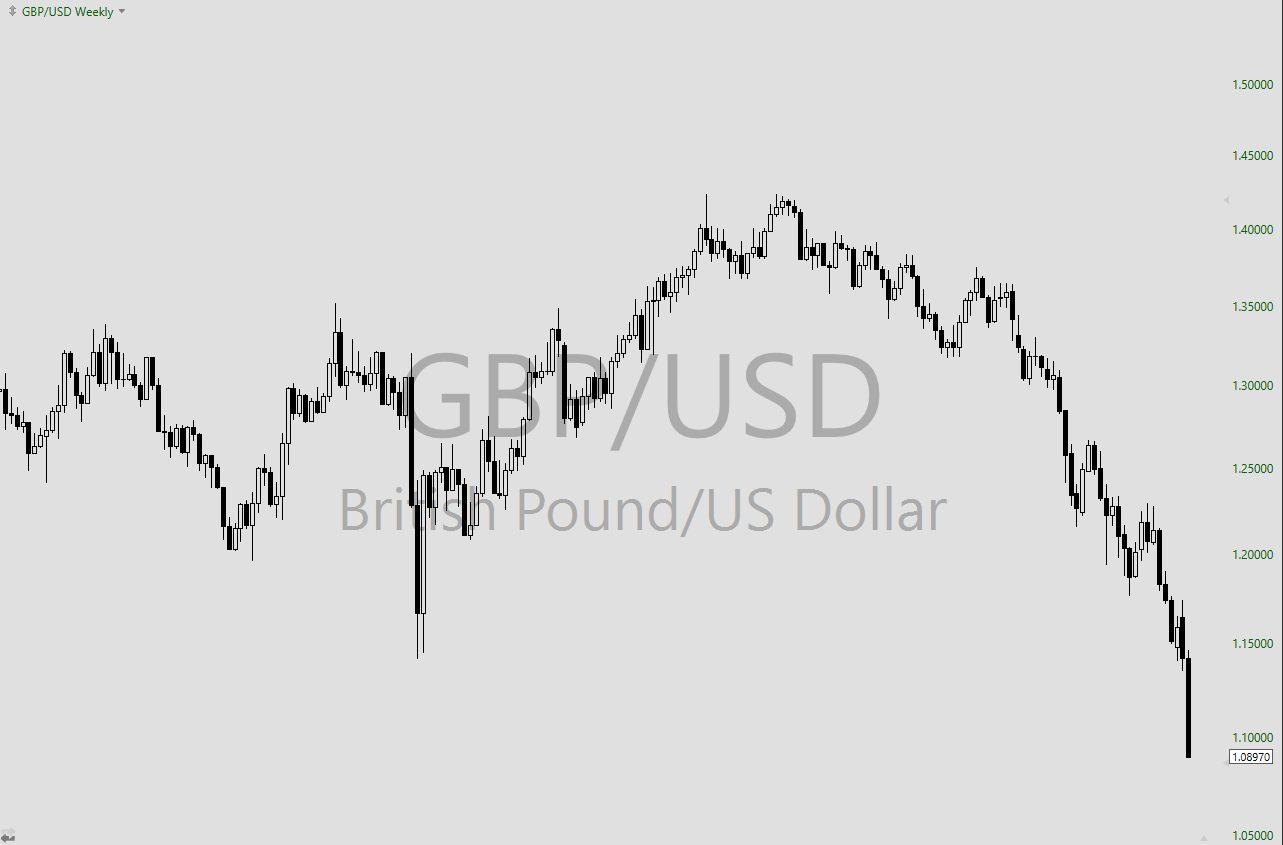 Not only in terms of share price. You will also see some FTSE100 companies showing stronger revenue growth because their earning are in dollars/euros and then restated in pounds. [Yes the pound is falling against the Euro too i.e. 1.19 in early August to 1.12 today]

Not a bad current insight, in that order.

[1st] Global Infrastructure fund with a strong top10 - Been a great place this year to store wealth for the LONG TERM (5+ years, 15+ years ideally) 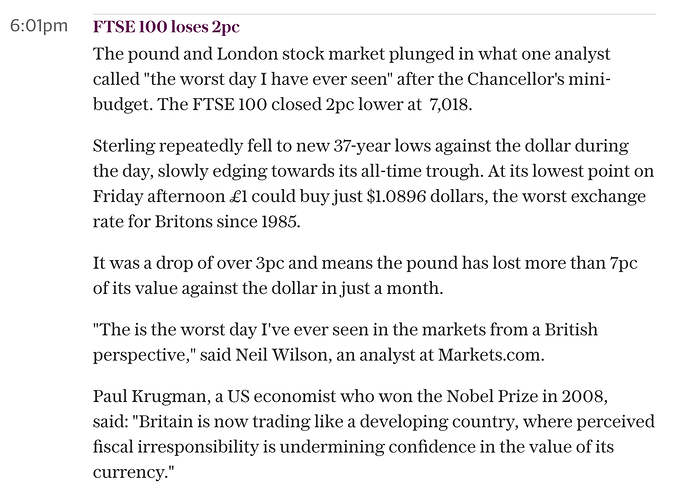 We have had (and have) a very weak self-obsessed government & entourage persuaded into the US way of economics, without actually implementing strategies which will benefit the country from those economics whilst being fair & great for the UK’s working people. Whilst also desperately trying to cling-onto ‘tradition’ though without letting the majority actually peak into this privileged way of life of tradition.

So what is actually happening live, is the country is falling apart whilst they are still on the top deck holding onto the last pieces of what tradition they have, without a care at all for the people falling into the cracks who are actually honestly supporting the country.

With a weak government & entourage there are far too many backpacking off-of the UK’s working people. When these ‘elites’ should have been working equal toughness to keep the country on a steady upward projection creating higher quality careers for 100’s of thousands more UK people. Instead they have been disgustingly wrecking the environment for the many, by feasting greedily & enviously.

Every 6 months there seems to be more reason to have to take another portion of your wellbeing into your own hands, because the healthcare, the insurance, the pensions, the price rises, all seem to be attacking you at all directions, with no fair truths being spoken to the public from the ‘allowed to speak’ leaders.

Yet, with the growing amount of rules & fiercely draconian measures being placed on the public, you can not come to any other conclusion apart from 98% of your rights are being taken away which will leave you a less than 2% chance of being able to succeed any irrational system put in place, further pushing the already wealthy or already land/asset owners wealth beyond any comprehension, in other words, the already ridiculous is now growing so far fetched from possibility, that is has basically become impossible to succeed the leaders or historical elite. They bent every rule under the sun and had highly and easily manipulatable laws with no consequences to gain their position in the country, the word most ideal for this situation is they frikken stole their right to enormous wealth. Something only now people like the Kardashians have been aiming for. The tech boom has just created a giant pool of new generational wealth for those involved, piggy-backed on by the leeching aristocrats. No doubt the next boom is in personalised healthcare, though affordability in this decade is questionable.

The fact stands, that the UK government and their ego’s have wrecked the economy. No bold moves have been made and zero levelling up has happened. This is a multi-decade fuck up.

Haven’t seen anything yet!

At least it’s the weekend!